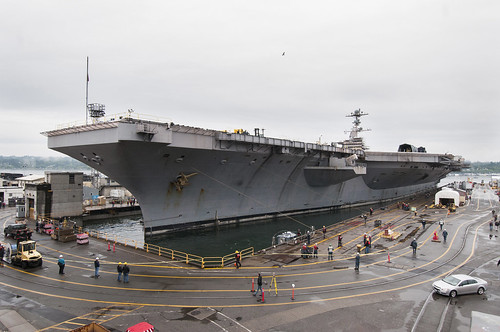 The dry dock provides Sailors and shipyard workers access to the ship below the waterline for maintenance, repairs and refurbishments.

The ship got underway June 26 from Pier Delta at Naval Base Kitsap, Bremerton to transit into the flooded dry dock using five tugboats. With minimal clearance on either side, the ship was then carefully positioned onto support blocks as the water slowly drained from the dock.

"Everyone was very careful and very coordinated throughout the docking evolution as there was little room for error," said Dale Coyle, dock assistant project superintendant, from Bremerton, Wash. "The [shipyard] riggers are trained for this evolution and took the lead while Stennis Sailors assisted us with additional manpower wherever they needed it."

During DPIA, Stennis is scheduled to undergo extensive maintenance and upgrades to improve its mission readiness and war fighting capabilities. Some of the more notable evolutions expected to occur include preserving and painting the ship's hull, upgrading the propulsion plant, refurbishing the crew's berthing compartments, and a complete replacement of the ship's computer networks and work stations.

"At the completion of DPIA, the material condition will be enhanced, the quality of life for the Sailors will be significantly improved and our war fighting capability will be improved," said Cmdr. Nito Blas, Stennis' chief engineer, from Mangilao, Guam.

With so many different projects to be completed during DPIA, Coyle said approximately 5,000 people, including PSNS & IMF personnel, the ship's crew and private contractors, will be working in and around the dry dock.

"We have estimated that more than 700,000 man-days of work comprised of Stennis Sailors, contractors, and PSNS and IMF employees that will be accomplished during this DPIA, making this the largest DPIA that any shipyard has worked," said Coyle.