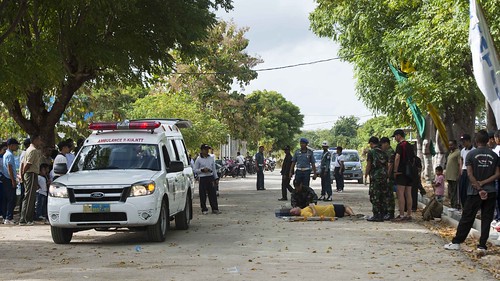 KUPANG, Indonesia — Service members and community disaster planners from Indonesia and the United States conducted a medical evacuation drill aboard the Kupang Marine Base in support of Pacific Partnership (PP14) 2014, May 27.

"In case of an emergency or civil unrest, we can move our forces from where they're working such as engineering or medical projects back to a designated safe-haven point," said Intelligence Specialist 1st Class Daniel Rodriguez, force protection officer for PP14. "[The Indonesian services] had excellent coordination since it was the first time they had ever worked together and we have the utmost confidence they'll be able to move us in the event of an emergency."

During the event, Indonesian Marines, local law enforcement and PP14 medical personnel provided aid to a U.S. Sailor with a simulated leg injury by providing onsite basic first aid and then transporting the Sailor to a local medical facility.

According to Rodriguez, training events like these are used to improve interoperability between partnering nations and allows them to gauge the capabilities of their hosts in the event of an emergency.

U.S. Army Capt. Mario Ponsell, assigned to the 84th Civil Affairs Battalion, said with service members from far away nations such as New Zealand and Singapore involved in the day-to-day events of PP14, the welfare and safety of the troops is a top priority.

"It's not only something that we have to worry about from the standpoint as the United States military," said Ponsell. "We have multiple partner nations involved in this mission, and the safety and care of all of our service members is just as critical as the mission itself."

Pacific Partnership is in its ninth iteration and is the largest annual multilateral humanitarian assistance and disaster relief preparedness mission conducted in the Asia-Pacific region.