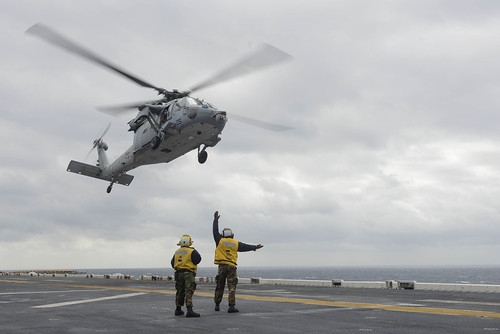 "It's great to be back at sea with our Sailors and Marines where we can continue to focus on our core combat capabilities," said Rear Adm. Hugh D. Wetherald, Commander, ESG 7. "With the addition of Green Bay and the significant capabilities she brings to the 7th Fleet amphibious forces, this deployment is the first opportunity to integrate her into the ARG-MEU team and the very important role we have in maintaining security and stability in the Asia-Pacific region."

"Practicing each mission set is vital to ARG-MEU readiness," said Capt. Heidi Agle, commodore, Amphibious Squadron 11. "Each evolution requires seamless integration among all units to execute effectively. I have no doubt every ship and Sailor in the ARG and every Marine onboard will successfully complete this intense training period and demonstrate the professionalism and proficiency we've learned to expect."

The 31st MEU and ships in the ARG work hand-in-hand every day to conduct amphibious, air and combat operations that assist in executing the Chief of Naval Operations Three Tenets: Operate Forward, Warfighting First and Be Ready.