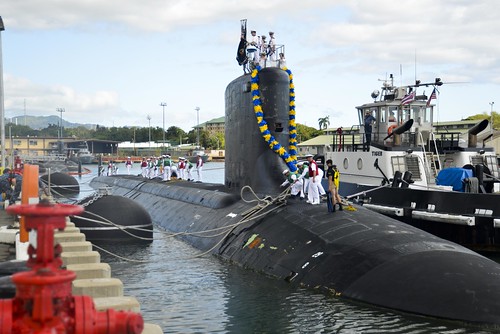 PEARL HARBOR — Friends and families of the crew of USS Hawaii (SSN 776) gathered at the submarine piers to welcome back the Virginia-class fast-attack submarine, returning March 10 to Joint Base Pearl Harbor-Hickam after completing a deployment to the Western Pacific.

"I couldn't be more proud of the crew of Hawaii," said Cmdr. William A. Patterson, Hawaii's commanding officer, a native of Holliston, Massachusetts. "Every one of them represented the submarine force, the Navy and the nation through seven port visits and did a fantastic job tactically when we were out doing our mission."

Hawaii returned home with a new second in charge, as Lt. Cmdr. Charles Phillips relieved Lt. Cmdr. Mark Robinson as executive officer of Hawaii in a pre-scheduled relief during the deployment.

As this was the first deployment for more than one-third of the crew, Phillips said one of the keys to mission success was how well Sailors supported each other.

"Our junior crew members eagerly met all challenges," said Phillips. "All first-time deployers took advantage of every opportunity to start and finish as many qualifications as they could."

During the deployment, 23 Sailors and six officers earned their designation as qualified in submarines and now wear their coveted "dolphin" warfare insignia.

Additionally, 18 Sailors advanced in rank and five Sailors were initiated into the chiefs' mess.

During the seven-month deployment, Hawaii strengthened relations with multiple countries taking part in maritime exercises and conducted port visits to Stirling, Australia, and the cities of Yokosuka and Sasebo in Japan.

"During my 14 years of submarine service, I have always heard of boats visiting Australia, and now I finally got to go," said Polston. "I loved meeting current submariners and veterans from all over the world, and being able to speak at an Australian High School."

"We were fortunate to be in town for the Royal Australian Navy's 100th year celebration of their submarine force," said Phillips.

Hawaii's crew participated in ceremonies held at the Maritime Museum and hosted distinguished visitors including both senior military and civilian leaders.

Upon her return from deployment, the "War Canoe," as the crew calls her, was escorted to the historic submarine piers of Joint Base Pearl Harbor-Hickam by outrigger canoes from the Honolulu Pearl Canoe Club, and greeted by hula dancers performing traditional chants.

"It was a huge honor to support the military community in this way," said Jason Leavitt, an outrigger canoe paddler. "It's not every day you get to paddle under the Ford Island Bridge, stop and pay your respects at the Arizona Memorial, and then meet up with the submarine USS Hawaii to escort her to the pier."

Friends and family crowded the pier with "welcome home" banners as they greeted loved ones following their scheduled deployment.

"It feels really amazing, I have been so nervous lately," said 8-year-old Briana Polston, looking forward to seeing her dad arrive. She said she was looking forward to doing the things they normally do. "We usually just chill at the house and have family time," she said.

"I am looking forward to spending time with my wife and daughter," said Polston, "as well as visiting with other family and catching up with friends."

Commissioned May 5, 2007, Hawaii was the third Virginia-class attack submarine constructed and the first to be named after the Aloha state, recognizing the tremendous support the Navy has enjoyed from the people and state of Hawaii, and in honor of the rich heritage of submarines in the Pacific.