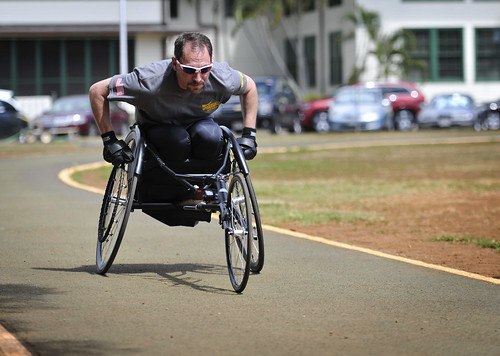 The event, which also is supported by U.S. Pacific Fleet, brings together 60 seriously wounded, ill and injured Sailors and Coast Guardsmen, who hail from around the country. The athletes are joined by more than 20 family members and caregivers.

"I'm most looking forward to getting back in shape and getting healthier. The sports are my favorite part; I'm very competitive," said retired Navy Aviation Support Equipment Technician 2nd Class Marlon Bevans, who was injured in a motorcycle accident in 2011. "But it's like a big family reunion when I come here, and that's a lot of fun."

After two days of practice, competition formally kicked off with archery and shooting (pistol) trials on March 10. The wounded warrior athletes are vying for a slot on the Team Navy roster and advancement to the annual joint-service Warrior Games.

In addition to archery and shooting, wounded warrior athletes will go head-to-head during the trials in cycling; sitting volleyball; swimming; track and field; and wheelchair basketball. Hundreds of local spectators are expected to attend the events, which are taking place at Joint Base Pearl Harbor-Hickam and Iolani High School in Honolulu.

Forty athletes will advance to the Warrior Games, which will take place in the summer. The final Team Navy roster will be announced in the coming weeks, after coaches and NWW staff members assess the results from the trials.

"It feels good to be here. I'm nervous because it's a competition, and, even at my age, I still get nervous," said retired Navy Construction Mechanic 1st Class Rory Aguilar, who suffered several injuries as a result of a combat deployment. "I really enjoy being with these men and women because we can relate to one another."

"The competition is great. But everyone here has a similar story - something they have to overcome - and we understand each other. That's the best part of this event," he added.

Each athlete has been assigned a sponsor from a local command, who helps them feel at home on the island and cheers for them during competition. In addition to the 60 sponsors, more than 100 volunteers will assist with event execution.

"I'm really excited during Rory's time off to try to get him out on the island, and to see some new places," said Navy Sonar Technician, Surface 1st Class Justin Merrill, who serves as Aguilar's sponsor. "He's very athletic and wants to stay competitive, though, so we won't take him away from practice too often."

"I'm just excited to be around all these great people this week," added Merrill, who is assigned to Center for Surface Combat Systems Detachment Pearl Harbor.

All of the athletes are enrolled in NWW, the Navy and Coast Guard's wounded warrior support program. NWW links enrollees to a variety of adaptive sports opportunities to keep them active and connect them to new friends.

"I'm excited to be here, and I feel a lot better than I did the last time I was here, when I was pretty sick," said retired Navy Hospitalman Shemariah Pradia, who was previously diagnosed with a serious illness." I really hope to make the team, but that's not really what all this is about. It's about not giving up."

For the latest news about the trials, follow NWW on Facebook (www.facebook.com/navysafeharbor). Visit http://safeharbor.navylive.dodlive.mil or call 855-NAVY-WWP to learn more about NWW and the benefits of adaptive sports.