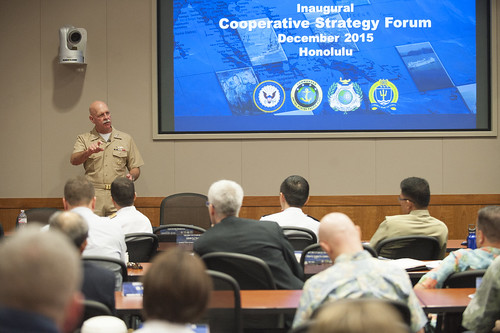 During the forum Swift delivered a keynote speech to attendees that shared his expectations of those operating in the waters of the Indo-Asia-Pacific.

The event involved representatives from ten partner nations with a focus on participants gaining a better understanding of each other's viewpoints and fostering improved future collaboration.

"This forum is designed to facilitate an exchange of views among all our allies and partners in the region," Gibbons said. "This exchange of views helps us to understand each other's approaches to the challenges in the region but it also facilitates personal relationships between the attendees. We have flag officers, O-6s, O-5s, and in the case of some countries O-4s who are going to be here and spend two days with their U.S. and other foreign country counterparts."

"One of the top three priorities in our curriculum both in workshops and courses that we teach is now maritime security," Odom said. "For us to hold an event here where you have the leaders or representatives of the leaders of the navies throughout this region discussing ways to cooperate on maritime issues is clearly quite an opportunity for us."

As part of the event, Swift explained why maintaining cooperation between partner nations in the region is important.

"Today all Indo-Asia-Pacific nations benefit from a rising tide of prosperity," Swift said. "We all have major stakes in this region's continued success, especially at sea, where so much of our trade, investment and interaction take place."

Swift then offered his thoughts on the way ahead for the Indo-Asia-Pacific Region.

"I'm convinced the continued promotion of the rules-based system that evolved over the past 70 years remains the best way forward for all nations in this region, large and small, to continue to rise peacefully, confidently, securely, and economically," Swift said. "My concern is that after many decades of peace and prosperity at sea, we may be seeing the leading edge of a return of 'might makes right' to the region. Such an approach may once again impact the vibrant but vulnerable waters of Southeast Asia."