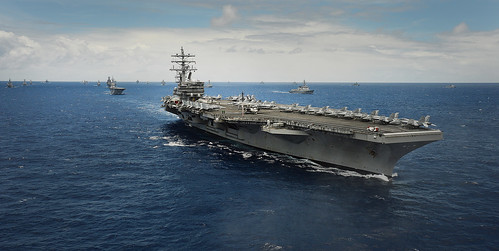 In this file photo from RIMPAC 2014, 42 ships and submarines from 15 nations steam in close formation. (U.S. Navy/MC1 Shannon Renfroe)

Editor’s note: On June 17, U.S. Third Fleet Public Affairs announced that Brazil would not participate in RIMPAC 2016 due to unforeseen scheduling commitments, bringing the number of participating nations to 26.

SAN DIEGO — Twenty-seven nations, 45 ships, five submarines, more than 200 aircraft and 25,000 personnel will participate in the biennial Rim of the Pacific (RIMPAC) exercise scheduled June 30 to Aug. 4, in and around the Hawaiian Islands and Southern California.

The world’s largest international maritime exercise, RIMPAC provides a unique training opportunity that helps participants foster and sustain cooperative relationships that are critical to ensuring the safety of sea lanes and security on the world’s oceans. RIMPAC 2016 is the 25th exercise in the series that began in 1971.

The theme of RIMPAC 2016 is “Capable, Adaptive, Partners.” The participating nations and forces will exercise a wide range of capabilities and demonstrate the inherent flexibility of maritime forces. These capabilities range from disaster relief and maritime security operations to sea control and complex warfighting. The relevant, realistic training program includes amphibious operations, gunnery, missile, anti-submarine and air defense exercises, as well as counter-piracy, mine clearance operations, explosive ordnance disposal and diving and salvage operations.

This is the first time that Brazil, Denmark, Germany, and Italy are participating in RIMPAC. Additional firsts will involve flexing the command and control structure for various at sea events and incorporating a submarine rescue exercise. This year will see amphibious operations in the Southern California operating area, feature a harpoon missile shoot from a U.S. Navy littoral combat ship and highlight fleet innovation during the Trident Warrior experimentation series.

Hosted by U.S. Pacific Fleet, RIMPAC 2016 will be led by U.S. Vice Adm. Nora Tyson, commander of the U.S. 3rd Fleet (C3F), who will serve as the Combined Task Force (CTF) Commander. Royal Canadian Navy Rear Adm. Scott Bishop will serve as deputy commander of the CTF, and Japan Maritime Self Defense Force Rear Adm. Koji Manabe as the vice commander. Other key leaders of the multinational force will include Commodore Malcolm Wise of the Royal Australian Navy, who will command the maritime component; Brig. Gen. Blaise Frawley of the Royal Canadian Air Force, who will command the air component; and the amphibious task force will be led by Royal New Zealand Navy Commodore James Gilmour.

Details of RIMPAC activities and imagery are available at http://www.cpf.navy.mil/rimpac. Media interested in covering the exercise should contact the C3F Public Affairs Office at (619) 767-4387. Contact information for the RIMPAC Combined Information Bureau will be made available prior to the beginning of the exercise.