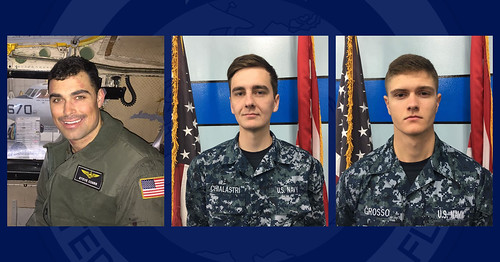 “Our thoughts and prayers are with the families of these Sailors,” said Vice Adm. Phil Sawyer, commander of U.S. 7th Fleet. “Their service and sacrifice will be lasting in 7th Fleet and we will continue to stand the watch for them, as they did bravely for all of us.”

“The thoughts and prayers of the entire team onboard Ronald Reagan go out to the families and friends of our fallen shipmates,” said Capt. Michael Wosje, Commander, Carrier Air Wing (CVW) 5. “We are thankful for our professional search and rescue teams and their incredible bravery. The entire Navy team is working together to investigate the cause of this mishap and we will remain focused on our mission to operate forward in a safe and professional manner to ensure peace and stability in the Indo-Asia-Pacific region.”

Combs, a native of Florida, was assigned to the “Providers” of Fleet Logistics Support Squadron (VRC) 30 and embarked aboard Ronald Reagan as part of Carrier Air Wing 5. His previous duty assignments include the “Greyhawks” of Carrier Airborne Early Warning Squadron (VAW) 120, the Center for Security Forces Detachment Kittery Point, in Portsmouth, New Hampshire, and Training Wing 4, in Corpus Christi, Texas. His awards include the National Defense Ribbon and the Navy Battle “E” Ribbon.

Chialastri, a native of Louisiana, was assigned to Ronald Reagan. His previous duty stations include USS America (LHA 6), Patrol Squadron (VP) 30, the “Pro’s Nest,” in Jacksonville, Florida, and the Center for Security Forces Detachment Kittery Point, in Portsmouth, New Hampshire. His awards include the National Defense Ribbon.

The C-2A Greyhound, assigned to VRC 30, crashed en route to Ronald Reagan Nov. 22 while operating in the Philippine Sea. The aircraft was carrying 11 crew and passengers at the time. Eight personnel were recovered on scene after the crash by U.S. Navy Helicopter Sea Combat Squadron (HSC) 12.

An investigation is in progress.