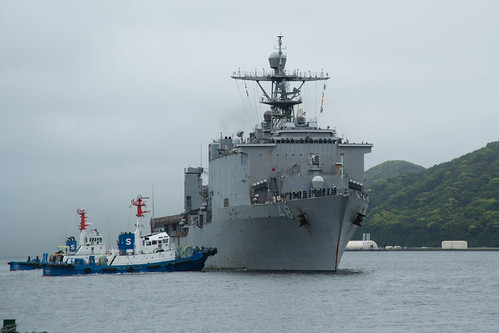 Ashland embarked several elements of the 31st Marine Expeditionary Unit (MEU) and specialized in a variety of missions to the full spectrum of MEU mission from the sea.

Ashland’s configuration provided the Navy-Marine Corps team a mechanized raid capability with a contingent of amphibious assault vehicles and a range of logistics specialty functions from the Combat Logistics Battalion 31 for disaster relief and non-combatant evacuation.

The Ashland and MEU, together with the entirety of a five-ship ESG, conducted a range of operations together, to include a bilateral drill with Japan Maritime Self Defense Force (JMSDF) in the East China Sea.

“A lot was accomplished this patrol with the Wasp ESG.” said Cmdr. Steven H. Wasson, Ashland’s commanding officer. “The Crew and the 31st MEU did a fantastic job completing essential and valuable training needed for Ashland and now we can return home to our family and loved ones knowing we are mission ready.”

Side-by-side with the 31st MEU, Ashland completed amphibious integration training (AIT) as a precursor to the MEU’s certification exercise (CERTEX). The CERTEX tested the ESG-MEU’s combined capability to plan and accomplish mission essential tasks as a team such as non-combatant evacuation operations (NEO), small-boat raids, and maritime interception operations.

Ashland also certified in amphibious warfare (AMW) prior to joining with the MEU that prepared the crew for the multitude of operations that were to come. The certification consisted of several events to include small boat operations, ballasting and de-ballasting, cargo handling, crane operations, and a wide range of amphibious landing craft operations.

“Being out at sea you gain an appreciation every time we go back home,” said Personnel Specialist 1st Class Fung Chan. “You are out on the waterfront to do a job that is high-tempo and so you need moments of rest and relaxation to keep yourself focused on the mission. Personally, I’ll be going to visit friends and enjoy eating some local sushi.”

As part of the Amphibious Force 7th Fleet amphibious ships based in Sasebo, Japan, Ashland will now be in Sasebo for a maintenance period and to prepare for an upcoming Board of Inspection and Survey (INSURV) scheduled for May.