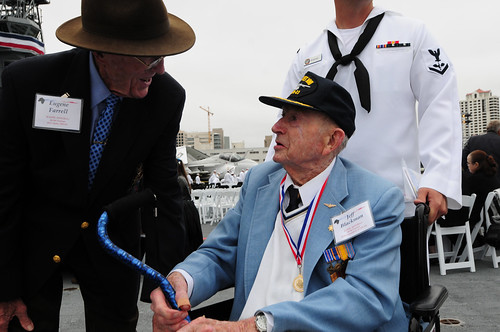 SAN DIEGO (NNS) - Active duty, retired service members and their families commemorated the 70th Anniversary of The Battle of Midway aboard the USS Midway Museum in San Diego, June 2.

The Battle of Midway took place June 4-7, 1942. During the battle, U.S. Navy carrier strike forces defeated an Imperial Japanese strike force that prevented them from capturing Midway Island. The Battle of Midway is an important marker in naval heritage because it is considered to have changed the course of the war in the Pacific within just a few days.

"When we face our darkest hours, we must always remember Midway - the resiliency of our Sailors in the face of such odds, the power of decisive leadership, and most of all on this night, as their numbers dwindle, the distinguished service of those who valiantly fought and brought honor to the Navy and the nation," said Adm. Mark Ferguson, vice chief of naval operations and guest speaker for the event.

During the commemoration, 15 surviving veterans of the Battle were acknowledged for their sacrifices and actions during the battle.

"It's important to remember our history because we wouldn't be here without those who fought before us," said Information Technician 2nd Class Stephany Sherman, attendee. "I am honored to be able to be here to support and thank the Midway veterans."

While delivering the keynote address, Ferguson spoke of the importance of the pacific region to America during the battle and its importance today.

"We are again focusing on the Pacific - this time not in war, but in recognition that our long-term economic and security interests are inextricably linked to developments in the Asia-Pacific region," said Ferguson. "Our new defense strategy underscores our continued commitment to our allies and partners in the Pacific. We are proud to count among our allies today: Japan, Australia, and many other partner nations that recognize that security and stability are forged in these partnerships."

As part of the commemoration, a special Battle of Midway documentary was presented. The video consisted of interviews with the Midway veterans where they recounted the events of those four days in battle.

"We should never forget their sacrifice and service, and hold ourselves to the standard of Midway when our moment comes," said Ferguson.