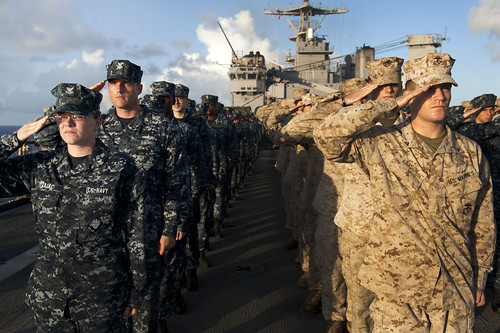 The historic battle took place June 4-7, 1942, and is considered to be the turning point of the war in the Pacific. The U.S. had a large disadvantage when it came to numbers of ships involved in the battle, but had the element of surprise due to crucial support from U.S. code breakers.

“Only six months after the devastating attack on Pearl Harbor, our Navy shaped a defining moment in history and forged a proud chapter in our naval heritage,” said Cmdr. Michael Harris, Pearl Harbor’s executive officer.

Harris said the lessons of the Battle of Midway endure today as the United States continues to be a maritime nation, with security and stability tied to the sea.

“This historic victory can be attributed to traits that continue in the Navy today,” said Harris. “Bold, confident and proficient Sailors willing to go into harm's way with well built, resilient ships and aircraft.”

“It was an honor to pay tribute to those heroes of our naval history,” said Denius. “In those few days, they proved that our Navy is more than capable of accomplishing extraordinary tasks.”

The ceremony concluded with a moment of silence in memory of the veterans who took part in and lost their lives during the epic battle.

Pearl Harbor and the 11th MEU are part of the Makin Island Amphibious Ready Group that is currently deployed to the U.S. 7th Fleet area of operations.