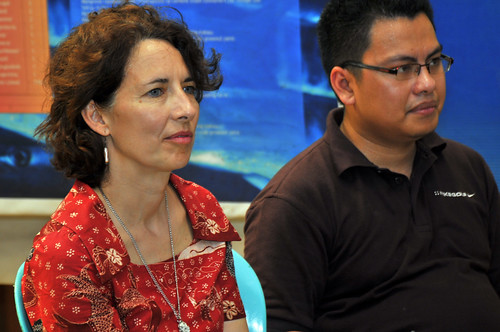 NORTH SULAWESI, Indonesia (NNS) - The U.S. Consul General of Surabaya visited Bunaken National Marine Park in the province of North Sulawesi, Indonesia, as part of a visit to the Pacific Partnership 2012 mission, June 2.

The purpose of Kristen Bauer's visit was to review progress of eco-tourism on the island, which was once funded by the United States Agency for International Development (USAID) as a sustainability project more than ten years ago.

"Environmental cooperation is one of the six key areas of cooperation Presidents Obama and Yudhoyono identified when they drafted and signed the U.S.-Indonesia Comprehensive Partnership Agreement in November 2010," Bauer said. "Partnering with Indonesia to help protect their natural environment and fight climate change is, therefore, one of our top priorities."

Bunaken National Marine Park is a marine reserve park located in the Coral Triangle that provides a habitat to 390 species of coral as well as many fish, mollusk, reptile and marine mammal species.

"From 1997 until 2003, USAID funded the program to strengthen natural resource management in North Sulawesi," Bauer said. "The purpose of our trip today was to see how the park has developed on its own over the last ten years."

Bauer said during the time USAID worked with the project, they developed a sustainable model to manage fish resources which has become a best practice for other assistance programs in Indonesia and around the world.

"USAID collaborated with local fishermen to set up a zoning plan that protected key fish spawning grounds as no-fish zones," Bauer said. "Other zones were designated as open for fishing, which allowed fishermen to maintain their livelihoods without threatening the ecosystem."

The program also included an agreement from all villages in the area to use only sustainable fishing methods, which included local fishermen, not government or military, patrolling the areas to deter the use of destructive fishing practices.

Randy Matulalu, a worker with World Wildlife Foundation, said one of the most interesting things they had found since starting the project was that the amount of fish caught by local fisheries has increased dramatically, but has had very little impact on the overall fish populations.

"Keeping three percent of the reefs as a no-fishing zone has allowed fish to reproduce at a rate equal to that which they are caught," he said.

This program has helped protect fish spawning grounds that are vital to the local economy since a majority of workers are fisherman.

Additionally, fish are one of the main sources of protein for local consumers. Without the local fish, local nutritional standards, and as a result health conditions, would plummet.

Bunaken National Park is now under the management of the local fisherman who patrol it, and the park operates as a fully self sustaining ecosystem.

"The fish at Bunaken provide much of the nourishment for the people here while the people provide the fish with a large and diverse environment," Matulalu said. "It is very important that we work together with the local and international governments to continue projects like Bunaken National Park, both here and around the world."

Pacific Partnership is an annual U.S. Pacific Fleet humanitarian and civic action mission designed to work with and through host nations to build partnerships and a collective ability to respond to natural disasters. This year's mission will visit four host nations with representation from 13 partner nations and approximately 23 non-governmental organizations and agencies along with hundreds of joint service and civilian mariner participants.