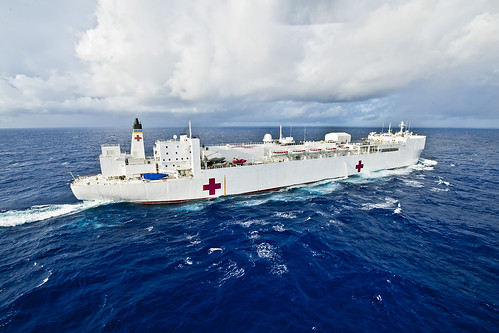 Mercy set sail with more than 950 service members and civilians following the Guam port visit, which allowed embarkation of the remaining mission personnel and on-load of supplies it needed before its first mission port.

Jenni Hoerman, a nurse with Latter Day Saints Charities, said it was amazing to finally be aboard.

"For years I have been waiting until my kids were old enough that I could come out here and take part in Pacific Partnership," said Hoerman. "It's like a dream come true."

Service members from Australia also embarked Mercy during the port visit in Guam.

Royal Australian Navy Cmdr. Ken Walters said the Australian crewmembers have jobs ranging from public affairs and engineers to nurses and surgical technicians, all which play an integral part of the mission.

"We have service members from the Australian Army, Navy and Air Force filling a variety of jobs both here on the Mercy and on the ground in Indonesia," said Walters.

In addition to people, Pacific Partnership also brought 115 pallets of supplies on board Mercy.

"This is our last on load of supplies before we hit Indonesia," said Logistics Specialist 1st Class Eunice Defro, Mercy's supply department leading petty officer. "We brought on board thousands of pounds of food and supplies for both the crew and the patients that we will be treating on the ship while in Indonesia."

Defro went on to say that it was very important to bring on board as much supplies as possible before arriving in Indonesia to ensure the crew has everything they need while performing the mission both aboard the Mercy and in Indonesia.

"We are going to have a lot of people doing a lot of things once we arrive at our mission area," said Defro. "It is very important we have everything on board that we need to take care of our crew while they are working hard in Indonesia."

Indonesia is the first mission port for Pacific Partnership 2012.

While in Indonesia service members and civilians from a variety of services, countries and non-governmental organizations will take part in numerous civic action projects along side host nation personnel with the goals of helping the people of Indonesia, enhancing existing partnerships and preparing in calm to respond in a crisis.

Now in its seventh year, Pacific Partnership is an annual U.S. Pacific Fleet humanitarian and civic assistance mission designed to work by, with and through host and partner nations, non-governmental organizations and international agencies to build partnerships and a collective ability to respond to natural disasters.