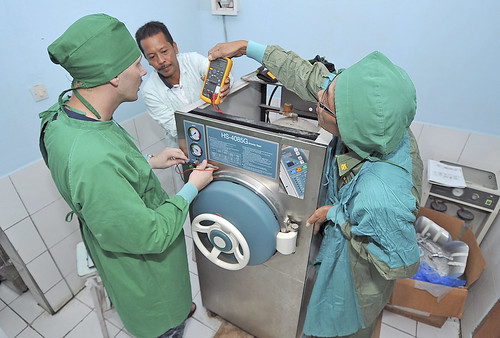 In a combined effort, biomedical repair, medical supply personnel and a team of radiology subject matter experts (SMEs) repaired two X-ray machines that had been donated to Talaud's hospital, but had never become operational.

Due to the team's efforts, the machines are now fully functional, and following further training by PP12 SMEs, the Indonesian medical team on Talaud will be self-sufficient in this vital technology.

"I'm proud of our team for bringing something new to the island of Talaud and giving the locals the capability to sustain such a vital piece of equipment," said Cmdr. Grant C. Wallace, director of Clinical Support Services aboard the Military Sealift Command hospital ship USNS Mercy (T-AH 19), and officer in charge of the radiology SMEs.

"If we weren't in Talaud to repair and troubleshoot the medical equipment, I think it would have remained unusable and left to gather dust," said Chief Hospital Corpsman Mauricio Lopez, Biomedical Repair leading chief petty officer. "I'm happy we were able to make a difference for the people of Talaud and improve the way they provide medical care."

While in Talaud, the SME radiology team provided four days of X-ray training to five Indonesian technicians and taught X-ray interpretive skills to multiple providers which gave them the basic knowledge and hands-on experience needed to be able to produce and evaluate basic X-ray studies.

"After being guided on how to operate the equipment, the Indonesian X-ray technicians began proficiently operating the equipment," said Wallace. "The SMEs aided the Indonesian providers with their basic X-ray interpretive skills which significantly improved the overall healthcare capabilities for Talaud and will now allow providers to manage their patients more effectively."

The information gained from the X-ray studies will give Indonesian providers the ability to evaluate their patients for musculoskeletal, abdominal and pulmonary abnormalities.

Wallace said all of the Indonesian citizens they interacted with were extremely happy and appreciative of the aid they had received.

"When the time came for us to leave the Talaud Hospital medical director was fighting back her tears as she said, 'Having an X-ray service on Talaud has been a dream of mine and your people were like angels who were sent to help our hospital achieve this ability,'" Wallace said. "It was an unforgettable experience to be part of PP12 and be able to aid the Indonesian people. They welcomed us with open arms and treated us like family."

Wallace continued, "The whole project underlines the importance of working with the host and partner nations to understand each others' cultures so we can improve the healthcare in the region, and prepare for possible future natural disasters."

Now in its seventh year, Pacific Partnership is an annual U.S. Pacific Fleet humanitarian and civic assistance mission designed to work by, with and through host and partner nations, non-governmental organizations and international agencies to build partnerships and a collective ability to respond to natural disasters.