Civil Engineers Go Above And Beyond In Philippines 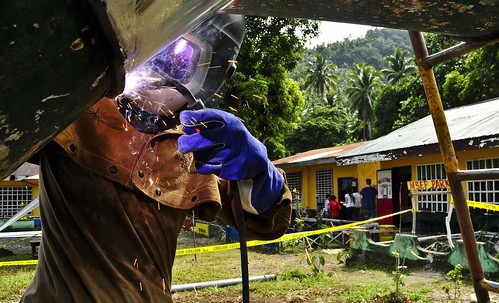 SAMAR, Philippines (June 24, 2012) Seabee Steel Worker 3rd Class Bryan Howe welds a new sheet of metal onto a slide for a new playground at a school in Malaga during Pacific Partnership. (Photo by Kristopher Radder)

SAMAR, Philippines (NNS) - U.S., Australian and Filipino civil engineers worked together to leave a legacy of fun and laughter in a small Filipino village during Pacific Partnership 2012.

Steelworker 3rd Class Bryan Howe, crew leader, said the project at the Malaga Elementary School includes renovation of a playground and repairs of the roof and cement walkways around the school.

"The old playground was badly rusted, and the roof was almost caving-in around many parts of the school," he said. "We also decided to put in new playground equipment including a basketball hoop, soccer goals and a swing set."

Chief Construction Mechanic Scott Balius said the planned projects were ahead of schedule, which allowed the team to add on additional projects.

"It is nice to be able to get ahead and do other projects. The renovated playground is something that will make so many kids happy," said Balius. "The roof and playground are expected to last another fifteen or twenty years."

Howe said the project is expected to have a high impact on the community.

"The principal has been so excited that we are doing the project for her school. Every day she is so grateful and asks how she can repay us," he said.

Balius said building the playground is different from most other projects the team has done.

In addition to this project, the Pacific Partnership 2012's joint team of engineers is building schoolhouses and taking part in a number of other engineering projects in the Western Samar area.