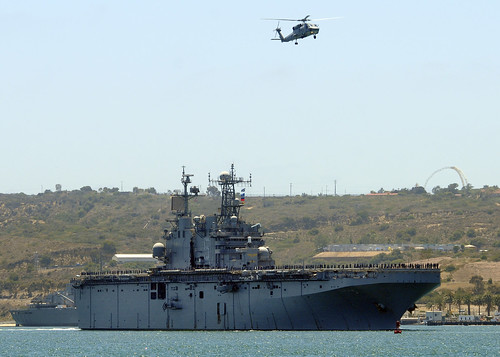 PACIFIC OCEAN - The Peleliu Amphibious Ready Group departed San Diego, June 25 for a group sail off the coast of California, in preparation for upcoming certifications.

ARG leadership noted the importance of allotting the ships time to practice and refine procedures before they begin more complex work up exercises.

“This is a critical time in the training cycle because it allows us to bring different elements of the ARG together prior to our major assessments,” said Capt. Mark Sakaguchi, commander, Amphibious Squadron Three. “Group Sail gives us a jump on preparations before we go into Composite Training Unit Exercise (COMPTUEX) and Certification Exercise (CERTEX) for the 15th Marine Expeditionary Unit and most importantly, deployment.”

One of the most important evolutions that the ships will conduct is a rolling airframe missile proficiency exercise. RAM is an all-weather system that defends against anti-ship missiles and other asymmetric threats. This will be a rare opportunity for the ships to use live rounds for training.

“The benefit from firing live rounds is that it allows the operators to see what really happens during an actual shoot,” said Lt. Cmdr. James Miller, combat systems officer, Amphibious Squadron Three. “That experience will go a long way towards increasing the proficiency and confidence of watchstanders who will know they can defend the ship effectively. Seeing the missile leave the launcher will also instill additional confidence in the system operators and maintainers as they will know that their system works as intended.”

Other exercises will include visit, board, search and seizure; helicopter wind envelope testing, search and rescue as well as various combat systems and engineering drills. Real-world operations will include replenishment at sea and well deck operations.

“I think a big piece for us is to train the crew to operate and communicate with the other ships,” said Capt. John Deehr, Peleliu’s commanding officer. “We will also use the time to work war fighting areas such as air defense with particular focus on the RAM missile shoot.”

Group Sail training promotes Commander, U.S. 3rd Fleet's focus of providing realistic, relevant training necessary for an effective global Navy in order to strengthen its ability to respond to crises and protect the collective maritime interests of the U.S and its allies.