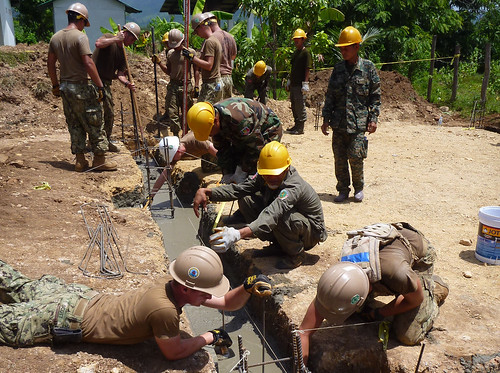 The wards will expand the scope of care offered at local health clinics in Cambodia.

After a traditional Buddhist blessing at both sites, Seabees from Naval Mobile Construction Battalions (NMCB) 40 and 74 and engineers from the Royal Cambodian Armed Forces (RCAF) worked hand-in-hand in preparation for the mission's future engineering civic action programs (ENCAP).

Led by Builder 2nd Class Daniel Reckers, a combined crew of 11 Seabees and 13 RCAF engineers, broke ground on a two-room maternity ward which will provide pre- and post-partum care for eight villages in the Kampot Province.

The project in the Prey Slek province has proven to be more of a challenge than the Kampot project. When the combined crew of 11 Seabees and 12 RCAF engineers arrived at the proposed site, they found little more than a poorly drained rice field. Undaunted by the poor soil conditions, the team coordinated with a local service to excavate nearly 1,100 cubic yards of marshy soil which was then back-filled with 2,200 cubic yards of clean earth.

Meanwhile, a combined team led by Steelworker 2nd Class Myra Golden, NMCB 74, cut and bent more than 15,000 linear feet of rebar which will provide structural integrity to both projects. Once the project area was compacted and leveled, holes and trenches were dug so that the forms which will give shape to wet concrete could be placed. Despite early setbacks, the "Can Do" spirit of the Seabees and ingenuity of the RCAF engineers quickly put the project back on track.

Builder 3rd Class Casey Noble, crew leader, expects to have this project completed by July 31. The Prey Slek project includes a new four room maternity center as well as repairs to existing facilities which serve 17 villages in the Takeo province.

Leadership from the two countries remarked on the cohesiveness of both units. Lt. j.g. Logan Parmele, officer in charge of NMCB 74, was impressed with how quickly the two nations are able to work together.

"These projects have proven the value of multinational engineering civic assistance projects. Seeing Seabees and RCAF engineers learning from and teaching each other is a rewarding experience," said Parmele.

Sgt. Chhun Vi Chai, RCAF engineer, has worked with other Seabee units in the past and looks forward to future opportunities to work with the Seabees.

"Working with the Seabees is always a memorable experience, both parties always learn so much from each other," said Chai.

As Pacific Partnership 2012 continues, the Seabees of NMCB 74 and the engineers of the Royal Cambodian Armed Forces will be joined by other Sailors and members from partner nations to complete a third maternity suite in the Sihanouk province.