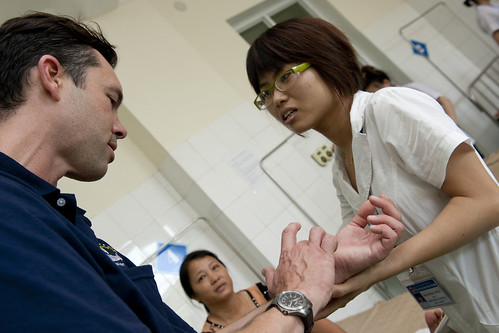 VINH, Vietnam (NNS) - A volunteer acupuncturist with Pacific Partnership 2012 (PP12) dipped into the well of ancient knowledge to better understand his craft while working in Vinh, Vietnam, July 13.

Aaron Cook, an acupuncturist from University of California San Diego, met with Phan Thi Thuy Duong, an acupuncture specialist at the Vihn City Hospital, to gain new insight into a medical craft that has been used for more than 700 years.

Acupuncture was added to the PP12 mission in Vietnam and will be offered to patients and crewmembers aboard the Military Sealift Command hospital ship USNS Mercy (T-AH 19), currently off the coast of Vinh.

Phan said Vietnamese acupuncture is used to treat disease and pain, along with a number of other ailments, using needling techniques, various herbal teas, and electrical stimulation to help patients feel healthier and more comfortable.

"We use a needle to put in the skin to test various pressure points on the body to either test or treat different things," she said. "Every case is slightly different, but we use methods to get desired affects with the patients."

Although there are multiple styles of acupuncture throughout the world, prominently in Eastern civilizations, many of the same techniques are used everywhere. According to traditional Chinese medicine, stimulating points on the body with needles can correct imbalances in the body's circulation system.

Cook said he was very happy that many techniques he uses in the United States are the same as those used in a culture that has been practicing it for so long.

"For me, this has been a huge cultural opportunity," he said. "It is a new thing in the United States, so seeing for myself that what we do there is so similar to how they do things here, where they have been doing it for hundreds of years, made me feel very good about the practices I have seen back home."

Cook added that although a lot of the processes he uses are similar, there is an important social difference between East and West.

"The main difference is that in the U.S. a lot of people are afraid of acupuncture because they are afraid it is going to hurt. It really makes them afraid, so you have to be gentle," he said. "Here, it is much more accepted and people seem to understand the practice and benefits better. So, they are able to do stronger needling."

Cook's Vietnamese counterpart, Duong, said it was great working with someone from a different culture to provide, and gain valuable information.

"Working with Dr. Cook was a great experience," she said. "We found out a lot of common practices and were able to show each other some of the differences."

Cook agreed with Duong and added that he will take the new techniques home with him.

"It was a great learning experience and a great way to pick up new skills."