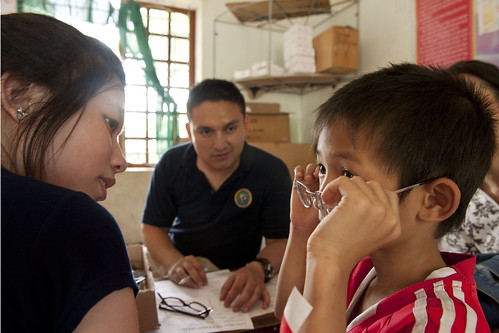 Members from the Optometry team have performed over 10,300 eye exams, provided more than 11,400 prescription glasses and 17,300 pairs of sunglasses in their quest to improve the eyesight of the patients they have seen during PP12.

Capt. Michael Radoiu is an optometrist working at the MEDCAPs to help provide care to the patients.

"We (people) are a visual species, so it is important to include Optometry in our medical activities during PP12," Radoiu said. "People here use their eyes for reading and for working both in offices and in the field, so a lot of the host nation's economy is reliant on the people being able to see well."

Patients being seen by the Optometry team are tested for numerous conditions before receiving glasses.

"Our job here is to screen patients for three things. The first is refractive errors, or visual problems that we can take care of and treat with glasses," Radoiu said. "The second thing we screen for is any kind of acute eye problems. We are limited because we can't do any surgery in the field, but we can do other things such as providing eye drops to help fight infections."

Radoiu said the third thing they screen for is chronic problems.

He said that even though the Optometry team is unable to treat chronic eye ailments, they do what they can to educate both the patients and the host nation providers on preventative treatments.

"We exchange a lot of information with the host nation doctors," he said. "We have learned as much, if not more, from them as they learned from us."

Another service the Optometry team provides is the distribution of sunglasses to all of the patients they see.

Hospitalman Ricardo Silva works as an optometry technician at PP12's MEDCAP sites and has handed out hundreds of pair of sunglasses since arriving in Vinh, Vietnam.

Silva said the sunglasses aren't just a cosmetic item, they protect the eyes as well.

"Sunglasses keep ultraviolet light from hitting the eyes, which is one of the biggest causes of cataracts in the population here," he said.

Providing glasses to the people they treat has another effect the team is very proud of.

Silva said the glasses he provides are very durable, and one pair can last for five to 10 years.