Secretary Of The Navy Presents Awards To JMSDF Leaders 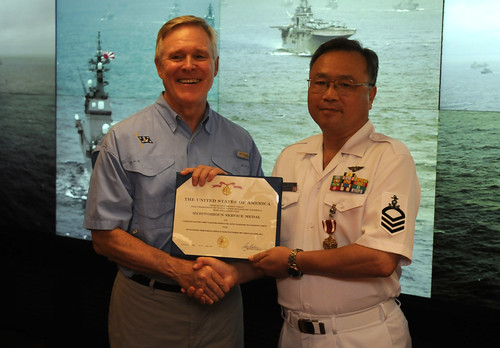 Mabus awarded JMSDF Vice Adm. Katsutoshi Kawano, commander in chief of the Self Defense Fleet, with the Legion of Merit. The Legion of Merit is the most prestigious non-combat related military medal the United States can confer to a foreign military officer.

Kawano was given the award to recognize his initiative to improve the interoperability between the U.S. Navy and the Maritime Self Defense Forces and his direction over JMSDF participation in more than 20 bi-lateral and multi-lateral exercises with the United States military.

Mabus also awarded Command Master Chief Petty Officer Takenori Shimoyuse, command master chief of the Self Defense Fleet, with the Meritorious Service Medal. The medal was given in recognition of Shimoyuse's effort during Operation Tomodachi, the response to the March 11, 2011 earthquake off the coast of Japan, and his initiative to broaden engagement activities with the U.S. Navy.

"Over the past 50 years, we have met the challenges we have faced together, from countering piracy to missile defense to providing humanitarian relief during Operation Tomodachi," said Mabus. "Although we can not know the challenges we will face in the next 50 years, we can be certain the men and women of the U.S. Navy will face them standing shoulder to shoulder with the Maritime Self Defense Force."

Held aboard a forward-deployed, U.S. Navy ship in the heart of Japan's Kanagawa prefecture, the ceremony symbolized the close and enduring ties between the two countries. Participants said the ceremony made clear how generation after generation of military officers have worked so closely together in continuing the dynamic relationship between the U.S. Navy and JMSDF.

"Vice Adm. Kawano and Fleet Master Chief Shimoyuse embody the cooperation and friendship that is so strong between our two great navies," said Vice Adm. Scott Swift, Commander U.S. 7th Fleet. "Whether we are participating in an exercise, coordinating operations, or planning for contingencies, their leadership ensures that our alliance with Japan is built on more than words; it is built on strong personal and professional relationships and actions that we take together each and every day."

Kawano and Shimoyuse recognized the magnitude of the awards. Both expressed appreciation for their awards and mentioned how they value the opportunity to work with the United States Navy.

"I am grateful to receive this award," said Shimoyuse. "I guarantee you, the U.S. Navy and JMSDF will continue to build on our brotherhood and our relationship will continue to grow even more important in the years to come."