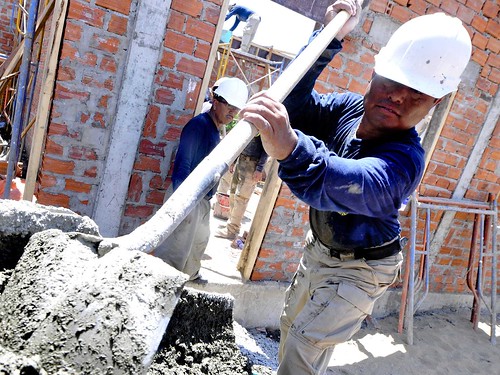 The team of Vietnamese, Australian and U.S. military and civilian engineers are adding a roof, roof beams, trusses and external walls on top of the foundation, as well as expanding the current structure that has been damaged from years of flooding.

"This building has had problems with flooding in the past," said Mayor Dang Dhai Yen. "It's exciting to think the new building will be a stronger structure that will be able to withstand the flooding and typhoons in the area."

Senior Chief Builder Todd Bernashe said the river in the background plays a large factor in the damages.

"There is a river in the back that supplies some of their water," Bernashe said. "When the river floods, water pours over the wall and fills the whole site."

To prevent future damage and ensure a longer-lasting facility, the team is encompassing a new site and new structure that is higher than the existing one.

Bernashe said more than 130 cubic meters of fill was brought in to raise the site and fill in a large swamp area by the river, a common occurrence in Vietnam, which in turn will also hold back the water when it rises.

Dang said the facility will have a major impact on the community.

"This building is expected to help volunteers treat nearly twice as many patients as it could before," said Dang. "The clinic sees almost 2,000 people a month, so it is very important for the safety and health of our community."

Bernashe said on top of the improvements in reducing the chances of flooding and other damages from natural disasters, the team is also providing fresh water capabilities.

"The community does not have access to running water, so another thing we are doing is building a water collection system on the roof of the structure," he said. "The water that runs from the roof will be collected and dumped into a new water tank above the bathroom that will serve as an extra water supply for the clinic."

Four rooms will also be added to the facility to help manage the large number of patients seen by the clinic.

When completed, the building is expected to outlast the current 67-year-old structure.

This PP12 project is part of an engineering civil action project that is designed to build lasting medical facilities for the Vietnamese community.