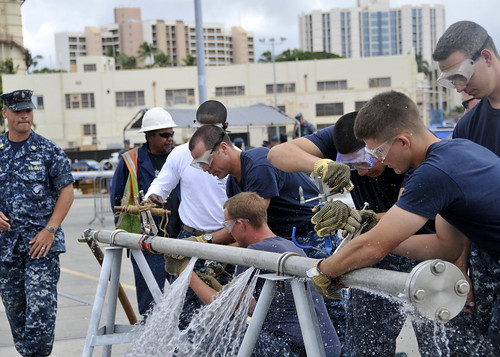 Sailors from the Los Angeles Class Submarine USS Texas (SSN 775) and USS City of Corpus Christi (SSN 705) participate in a pipe patching exercise while being evaluated by instructors from Naval Submarine Support Command (NSSC) during a damage control Olympics at Joint Base Pearl Harbor-Hickam, Sept. 5.

"We are using this event as a way to get the guys off the boat, have a little fun and use it as a training exercise," said NSSC organizer Senior Chief Electrician's Mate Michael Robinson. "This is our first time having the event, and it's a way to give back to the training program."

Robinson said that the evolution was to reinforce the fundamentals of basic damage control on board a submarine, showing personnel how to handle an emergency situation correctly.

The four different teams consisted of personnel not to exceed 30 years total for any one team, and each team took their turn in the various fire fighting, medical, and flooding evolutions.

"I have learned a lot today. One of the fun parts was using the pipe patch, something I have not done since submarine school," said Machinist Mate Fireman LeeRoy Andrew Ybarra from USS City of Corpus Christi. "I had a lot of fun, and I feel a lot more comfortable now to handle an emergency casualty situation."

Upon completion of the event, there was a barbecue at the pier, and NSSC instructors reviewed training with all the participants.

The commanding officer of NSSC, Cmdr. Brett Fillmore was on hand to greet the Sailors and thank them for participating.

Parting words came from NSSC's Command Master Chief James Miller. "It was impressive to see all the Sailors train each other, and they did a really good job. It's a great way to step up."

NSSC provides quality operational support in areas including operations, material and communications to submarines homeported in Pearl Harbor, their crews, families and the staffs of Submarine Squadrons 1 and 7.