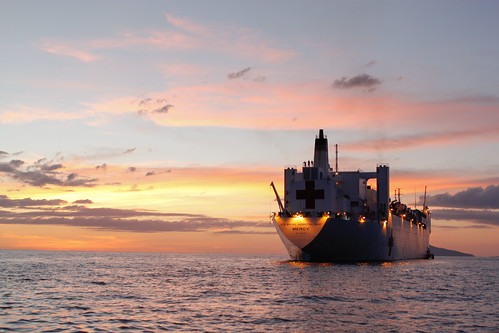 More than 1,200 service members and civilians took part in PP12, which visited the countries of Indonesia, the Philippines, Vietnam and Cambodia.

At the invitation of the host nations, PP12 brought the expertise of U.S. service members and personnel from 13 partner nation militaries and 28 Non-Governmental Organizations (NGO) to build and strengthen relationships and work together to learn how to better collectively respond to natural disasters and crisis.

Subject Matter Expert Exchanges (SMEE) were a large focus of this year's mission, tallying more than 60,000 man-hours of contact with host nation government, military, and civilian personnel to learn from one another in the areas of disaster relief preparation/simulations, joint surgeries, medical/dental and veterinary care, engineering and clean water supply, culinary exchanges and cultural learning.

Overall, the PP12 crew medically treated and evaluated more than 49,000 people at ashore temporary medical clinics, conducted more than 900 surgeries aboard Mercy, and treated or evaluated more than 7,000 livestock and domestic animals. U.S., Australian and host nation engineers built or refurbished 13 buildings and the crew collectively participated in more than 100 community service projects to include the delivery of 244 pallets (more than 144,000 pounds) of donated supplies requested by host nations. Mercy will have sailed more than 20,000 nautical miles, nearly the distance of circling the equator.

PP12 Mission Commander Capt. Jim Morgan said during the closing ceremony in Cambodia that the really important parts of this mission are the professional and cultural exchanges between PP12 participants and the host and partner nations.

"It's through increased understanding and trust that we will all work better and more efficiently together - not if, but when - a natural disaster strikes," said Morgan.