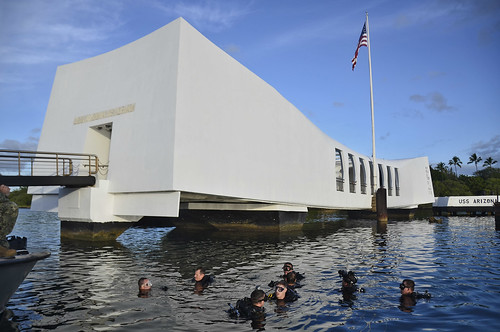 Seabee divers from Underwater Construction Team TWO, accompanied by divers from the National Park Service, prepare to inspect and clean chains used as part of the USS Arizona Memorial platform for visitors exiting and boarding the ferries.

HONOLULU – Underwater Construction Team (UCT) 2, from Port Hueneme, Calif., conducted an assessment of the chains holding the dock next to the USS Arizona Memorial on Joint Base Pearl Harbor-Hickam Sept. 11.

"Today, we're taking a look at the dock supports," said Billy Crowe, Park Service diver for the World War II Valor in the Pacific museum. "Basically cleaning, inspecting and mapping out the dock supports. Our dock is listing a little bit, and I believe at some point here the dock is going to be replaced, and this is basically preparation for that."

This is the first time this unit has been able to dive the memorial, a moment they shared on the 11th anniversary of the 9/11 attacks.

"I've never dove the Arizona, so it's kind of a once in a lifetime thing," said Steelworker 1st Class Nathan Terrazas. "September 11th has significance ... so it's awesome to be a part of this and help the park service out and be able to be there for them when they need us."

The divers also got a chance to take a guided tour with the park service divers to see the wreckage of the Arizona under water.

"It was mostly a work dive," Crowe said. "But we did what we call a resource orientation, which basically means we swam around the wreck and then let them have a look at it."

UCT 2 was established as an independent unit of the Naval Construction Force, U.S. Pacific Fleet. The team's mission is to provide a responsive military capability for underwater and waterfront engineering, construction and repair in support of Navy and Marine Corps operations.