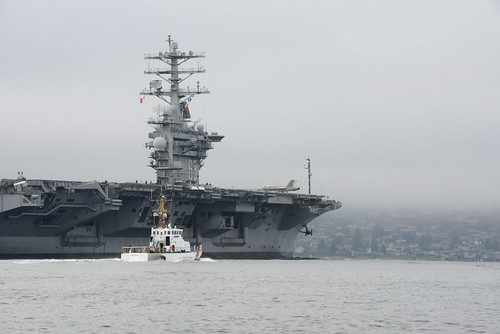 Though only a relatively short distance from Everett, the official homeport change to Bremerton will allow Nimitz families to move their households without paying out of pocket.

Nimitz will reside in Bremerton while undergoing its planned incremental availability at Puget Sound Naval Shipyard (PSNS) and Intermediate Maintenance Facility where the ship will receive scheduled maintenance and upgrades, an essential part in keeping the near 40 year old ship at peak performance.

"This availability is our chance to take care of some much needed work," said Capt. John C. Ring, Nimitz' commanding officer. "This is also a perfect opportunity for the crew to not only make the ship better but better themselves. I expect a challenging but very successful period working alongside PSNS and all the professionals at Naval Base Kitsap Bremerton."

Nimitz was last in Bremerton for its 2010-2012 docked planned incremental availability. Since then, Nimitz has participated in 2012 Rim of the Pacific, completed an 8.5 month Western Pacific deployment and participated in multiple task group exercises.