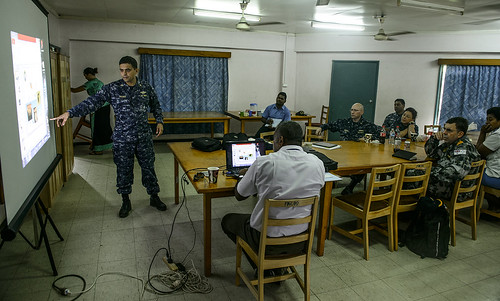 SAVUSAVU, Fiji - On a rainy Wednesday, Peniona Matedig, an environmental health officer at the Ministry of Health of Savusavu, Fiji, gathered with other Fijian public health experts and service members from Australia and the U.S. for a dengue symposium during Pacific Partnership 2015.

He started his speech with a brief history lesson.

“The first documented case of dengue in the Republic of Fiji was in the late 1800s,” said Matedig. He stared at a map of ongoing outbreaks and recollected his thoughts, “Then major outbreaks in 1992, 1995, and onward.”

Capt. Andy Robertson, an Australian public health physician attached to the hospital ship USNS Mercy (T-AH 19) for the PP15 mission explained why the disease is so serious. “Dengue is a viral disease that is carried by mosquitoes, so people are bitten by mosquitoes and it’s spread from their bite. People get sick five to eight days after they’ve been bitten. They get headaches, pain behind their eyes, nausea, vomiting, and a lot of pains in the muscles, joints and bones. It’s sometimes called ‘break bone fever’ because the pain is like breaking bones.”

According to the Centers for Disease Control and Prevention, one third of the world population lives in an area at risk for dengue. It is the leading cause of death and illness in the tropics and subtropics, and while dengue rarely occurs in the continental United States, it is endemic in many popular tourist destinations in Latin America, Southeast Asia, and the Pacific islands.

“Depending on the location, it’s difficult to stop the spread,” said Lt. Cmdr. Toby Wayne Palmer, from Moultrie, Georgia, an entomologist assigned to Mercy. “[Mosquitoes] can breed in discarded toilets, buckets, or even tire ruts where they were doing construction. It’s important to take care of the entire area, because we are concerned about this mosquito, we want to make sure it doesn’t transmit the disease any farther.”

The dengue symposium was centered on lessons learned after a dengue outbreak in Savusavu in 2014. According to Roberston, for every death, 150 cases go unreported.

The outbreak in Fiji has taken the lives of two people, and since 2014, spread from island to island through merchants and travelers, said Matedig. He explained that children tend to get dengue first. The 2014 outbreak was nicknamed the ‘eyes of the crocodile.’

“The purpose of this symposium was to provide a joint group of experts from the U.S., its allies, the local Fijians to discuss disease vectors and primarily dengue. It’s a huge virus that can cause serious illness or death,” explained Palmer. “We are trying to find a way to mitigate it, how to care for the symptoms and how to control it in the area. This way we learn what the local Fijians do and what the U.S. and Australians do themselves.”

An entomologist, Palmer specializes on diseases that can transfer from any type of animal or environment to people. “[The Fijians] were interested in the mosquitos. The characteristics of what the mosquitos look like as adults and also the immature version, such as the larvae, and what to look for to control them.”

The preventative control measures taken by the Fijian Ministry of Health include, tire burning, insecticide spray, spot fines for carelessness leading to mosquito larvae breed sites, and preventive biological introduction, which is carefully introducing a new species of flora or fauna to counter the invasive or destructive species, explained Matedig.

It has been effective in slowing down the spread of dengue in the town of Savusavu, and according to Robertson, the international community has a lot to learn from these control measures, including how they identified where the cases started, how they tracked them and took efforts to bring the spread to a close.

“Our countermeasure is source reduction,” said Matedig. “We have introduced a method of source reduction destruction to intercept the mode of transition. We want to destroy the breeding ground for the mosquito species.

“It is a domesticated mosquito, so it lives closely with people, and there is a clear association with the breeding containers it lives in and people. It has become a menace to us,” says Matedig, as he pauses and looks around the room at the multi-national environmental chatter. He continued, “The new trend in Fiji is the global village, the global family. We have to work together to get things done.”

Palmer said that PP15 has been a good chance for all the participants to exchange ideas and experiences.

“Pacific Partnership has been very rewarding. I’ve gotten to have a lot of interactions with the locals, as well as with our nation’s allies,” said Palmer. “We are able to talk about different insects, not only mosquitoes, but head lice, ticks, and a bunch of other insects. I’ve loved my time so far - working with the Fijians has been outstanding. They are very friendly and open to exchange of ideas.”

“Positive information is power. It is a very powerful tool towards dengue eradication,” said Matedig.

Pacific Partnership is in its tenth iteration and is the largest annual multilateral humanitarian assistance and disaster relief preparedness mission conducted in the Indo-Asia-Pacific region.

While training for crisis conditions, Pacific Partnership missions to date have provided real world medical care to approximately 270,000 patients and veterinary services to more than 38,999 animals. Additionally, the mission has provided critical infrastructure development to host nations through more than 180 engineering projects.