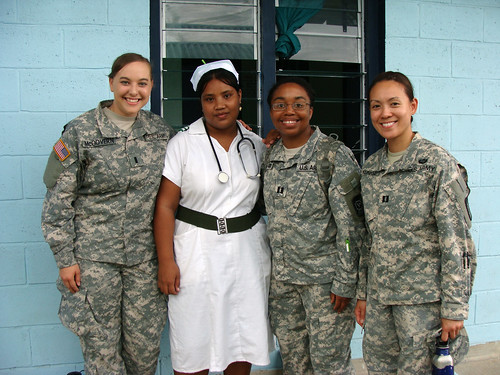 Hinneifa attended the course, taught by Army nurses from the 62nd Medical Task Force and received refresher training in CPR. With the training still fresh in her mind, Hinneifa jumped to action when an emergency occurred in her village.

While caring for her own child, she heard the frantic screams of a villager nearby who was cradling an unconscious young boy in his arms. She approached the man and noticed that the child was blue from a lack of oxygen in the blood. The boy had been swimming in the beach outside of his village and drowned.

Hinneifa immediately began performing CPR. The boy was revived after two cycles of CPR. He regained some consciousness, had a steady pulse, and was spontaneously breathing on his own. He was transported to the Emergency Room at Tungaru Hospital. The boy is expected to fully recover.

“Abbie saved this young boy’s life,” said Col. Christensen Hsu. “Our medical task force is trained to save the lives of others but it will be the local doctors, nurses, and first responders of Kiribati who will save lives on the island.”

The mission was to enhance the country’s medical capabilities in order to build capacity to respond to all hazards including disease outbreaks and natural disasters.

Healthcare providers conducted educational symposiums, life-saving skills courses, and healthcare lectures during their visit to the island. Additionally, doctors, nurses, dentists, and technicians worked alongside the local providers in the clinics to share diagnostic skills and exchange ideas.

“This is a different approach from the humanitarian missions of the past in which the emphasis was the delivery of direct healthcare services to the underserved population of a developing country,” said Hsu. “The local doctors, nurses, and first responders like the police and ambulance drivers who were trained by the 62nd Medical Task Force now have the responsibility to execute these life-saving skills. The measure of effectiveness for the training provided can only be revealed with time but it didn’t take months to see a result.”