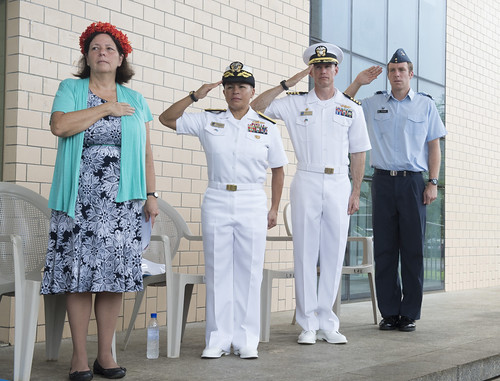 Kolonia, Pohnpei, Federated States of Micronesia (FSM) acting governor Marcelo Peterson expressed his gratitude for the work that Pacific Partnership will be completing in Micronesia.

“I am confident that the next two weeks, this partnership will make a positive, lasting impact on the people of the Federated States of Micronesia. On behalf of the people of FSM, I would like to extend our sincere gratitude to the U.S. for your unwavering commitment,” said Peterson. “I would also like to thank those of you who have been working to make this possible.”

In his remarks at the opening ceremony, Federated States of Micronesia Vice President Yosiwo George spoke of the value of friendships and partnerships, especially that between the United States and FSM.

“We have gathered today to witness a ceremony to mark the commencement of the mission,” said George. “In doing so, perhaps it is fitting we use this occasion to reflect on the unique partnership that the FSM has with the United States of America. It is a special partnership forged many years ago, based on historic times, common shared values, principles and mutual desire for friendship.”

To the crew of Task Force Forager and Pacific Partnership, George had these words.

“I ask that you showcase our island hospitality and show the Micronesian spirit of friendship and camaraderie. I trust that this stay will extend your cooperation, understanding and support so that the mission’s objectives are implemented efficiently and effectively.

“At the end of it all, remember and know that your friendly interactions will make the mission successful, memorable and enjoyable for all of us,” he said.

Millinocket and embarked Task Force Forager, led by an expeditionary command element from the Navy's 30th Naval Construction Regiment (30 NCR) from Port Hueneme, California, are currently serving as the secondary platform for Pacific Partnership 2015. The primary platform for the mission is the Military Sealift Command hospital ship USNS Mercy (T-AH 19), currently in route to its second mission port of Papua New Guinea.