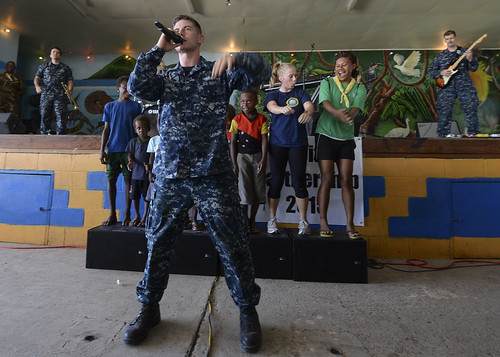 Members of the U.S. Pacific Fleet Band perform for students at the Kokopo Secondary School.

The volunteer event was one of several community outreach projects that took place in Kokopo during Mercy’s port visit.

“We came by to visit the students and help them paint, also to develop a relationship with the community,” said Personnel Specialist 2nd Class Cabirou Chitou, the team lead for the event.

From the shore it was a 45-minute van drive across both paved and bumpy, unpaved roads. Kokopo Primary School is located off a main road with open fields and small classroom buildings around it.

Once the 18 Sailors set foot on the school grounds, the chatter of students in the classrooms became increasingly louder. The students were excited to see the Sailors in their yellow PT shirts and blue shorts and quickly ran outside to greet them.

“I am very excited to see and meet them,” said one student. “They are very nice!”

After introductions, students and Sailors split up into groups of three, working on locations across the school grounds. Some sanded and primed a fence connected to the main entrance gate, while others worked on railings around the school.

The rugged sound of sand paper hitting metal along with conversations between the groups filled the air.

Many students asked Sailors questions about what it was like to live in America and what the U.S. Navy was like.

“They wanted to know more about the U.S., the culture and how they can travel to the U.S.,” said Chitou.

The students, at first shy and timid, quickly became friends with the Sailors around them. Shortly after, phones were out and Sailors and students took numerous “selfies” and group photos.

This was the first time the U.S. Navy has visited the school, and Paul Wright, the school principal, said he was very pleased with the volunteers’ efforts.

“It was a fun time,” said Wright. “We are looking forward to the next visit.”

When the day was finished, the Sailors and students had painted the school’s fence and railings in the school’s colors – blue and yellow.

More volunteers came the school again throughout the week to play sports with students, and the Navy’s Pacific Fleet Band also performed.

Mercy is currently in transit to the Republic of the Philippines for its third mission port of PP15. Pacific Partnership is in its tenth iteration and is the largest annual multilateral humanitarian assistance and disaster relief preparedness mission conducted in the Indo-Asia-Pacific region.

While training for crisis conditions, Pacific Partnership missions to date have provided real world medical care to approximately 270,000 patients and veterinary services to more than 38,000 animals. Critical infrastructure development has been supported in host nations during more than 180 engineering projects.