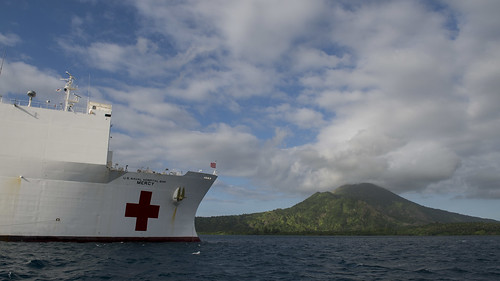 The hospital ship USNS Mercy sits at anchorage in Simpson Harbor off the coast of Rabual during Pacific Partnership 2015.

RABAUL, Papua New Guinea - On Sept. 18, 1994, the Rabaul caldera, an active volcano located on the northern part of East New Britain in Papua New Guinea, erupted and nearly wiped out the nearby town of Rabaul.

Approximately 30,000 people were evacuated from Rabaul to the nearby towns of Kerevat and Kokopo. The initial eruption threw an ash plume 60,000 feet into the atmosphere, and triggered heavy rains and intense lightning. The rains soaked the already thick ash that had fallen on buildings, and the intense weight collapsed an estimated 80 percent of the buildings in the town. The ash was estimated to be at least 2.5 feet thick across the city, with some areas having as much as 5-7 feet of accumulation. The heavy rains also caused flooding and mudflows in the surrounding areas.

Having already lived through such a catastrophe, the people who now reside in the town of Rabaul know a recurrence of this eruption is all too possible. Even today as they look across Simpson Harbor they are reminded of the danger as they see smoke rising from atop the Tavurvur vent.

This is why personnel from the U.S. Navy, Royal Australian Navy, and disaster response experts from Papua New Guinea came together July 9 aboard the hospital ship USNS Mercy (T-AH 19) to conduct training and hold a discussion to better prepare Rabaul for future natural disasters. Mercy was anchored off the coast of Rabaul for its second mission stop of Pacific Partnership 2015, the largest annual multilateral humanitarian assistance and disaster relief preparedness mission conducted in the Indo-Asia-Pacific region.

“There was a collaboration of all these individuals that came aboard to start working on a disaster plan,” said Cmdr. Lisa Kelty, who was one of the participants. “We [simulated] a volcanic eruption similar to what Papua New Guinea had in 1994, talked about when it took place, and what the extent of the damage was. We left it to them to figure out how they would respond to that particular vignette.”

During this tabletop discussion, the goal was to develop a workable disaster management plan for the region.

“We developed a scenario that is very realistic and very specific for the area - specifically Rabaul, because they have very real experience with live volcanic eruptions,” said Royal Australian Navy Cmdr. Darren Delany. “We ran through the scenario based on some of the history of Rabaul. So the scenario took place with significant destruction to the infrastructure, lives and well-being of the people of Rabaul. In doing so, we brought out different stakeholders together to run a hypothetical exercise.”

According to Delany, the discussion provided people of Rabaul with a foundation for its future disaster response plans.

“It was a good opportunity for the [local] people to express how they see disaster management, how they see it evolving in the future and how they can start to work together,” said Delany. “Although they have gone through disasters in the past, there is nothing really solid right now for them to use in dealing with a major problem. So what we did is to really run the exercise so that these people talk to each other, and get them to express some of their experiences with previous disasters and then formulate a plan so they can move forward.”

Training for disaster relief preparedness will continue throughout the rest of Pacific Partnership 2015 in Mercy’s upcoming mission ports.

“In the Philippines we have a four-day symposium dedicated specifically to humanitarian assistance and disaster relief,” said Delany. “We also run mass causality exercises on the ship. It’s a hypothetical exercise, but it’s something that is not unrealistic. We are also working toward a massive exercise conducted in Vietnam.”

Delany believes preparation and continuous training during Pacific Partnership help the U.S. military, Australian military and partner nations to be better equipped to work with each other if and when the time comes to conduct disaster relief missions.

“The participation of Mercy in exercises like these is extremely important because this sort of platform is a good place to respond to major disasters,” said Delany. “The magnitude of Mercy and its ability to accommodate such large numbers of patients and to carry such massive surgical capability makes this an ideal platform to respond to humanitarian assistance [missions].”

While training for crisis conditions, Pacific Partnership missions to date have provided medical care to approximately 270,000 patients and veterinary services to more than 38,000 animals. Additionally, Pacific Partnership has provided critical infrastructure development to host nations through the completion of more than 180 engineering projects.