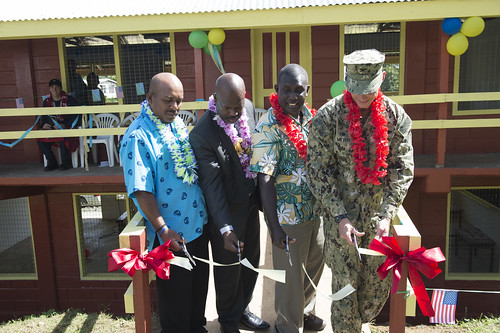 Allen Ketei, the principal of Vura Primary School, personally thanked the service members involved in the project for their hard work.

“Because of everything you have done for us, now we can instruct more students and provide them with the resources they need to be successful,” said Ketei. “We could not have completed this without you.”

U.S. Seabees and Marines assigned to Task Force Forager embarked aboard the Military Sealift Command joint high speed vessel USNS Millinocket (JHSV 3) began renovations of the school July 11. In 12 days the Seabees and Marines put new roofing on a building, poured concrete sidewalks and painted the entire complex. Because of their work, Vura Primary School can now hold up to 450 additional students.

“Education is very important to the people of the Solomon Islands,” he said. “This kind act will give us a push to put our focus on education.”

The day also held special meaning for the U.S. Marines and Seabees in attendance as they remembered those who went before, fighting on the island 73 years ago during the Battle of Guadalcanal.

“Seventy-three years later, we are not fighting in the Solomon Islands, we are here with great compassion and continue to build for peace with freedom,” said Commodore, Task Force Forager, Capt. James Meyer.

Meyer quoted a famous Seabee inscription which reads, “With willing hearts and skillful hands, the difficult we do at once. The impossible takes a bit longer.

The engineering team completed the near impossible in two weeks with their work,” he said.