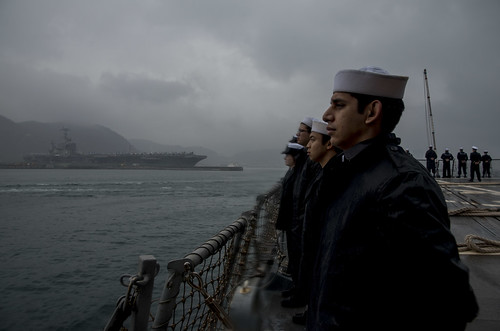 WATERS OFF THE KOREAN PENINSULA - The John C. Stennis Strike Group (JCSSG) departed ports in the Republic of Korea (ROK) to participate in exercise Foal Eagle with the ROK Armed Forces, March 18.

Foal Eagle is a regularly scheduled, annual exercise based on realistic training scenarios intended to improve U.S. and ROK forces’ interoperability. The Army, Navy, Air Force and Marines will participate in the exercise, with the naval portion of Foal Eagle taking place in international waters around South Korea, featuring a full spectrum of maritime operations.

Sailors and locals had the opportunity to interact during JCSSG’s port visit in Republic ofKorea. Nearly 1,500 South Koreans toured USS John C. Stennis’ (CVN 74) flight deck and hangar bay. Sailors participated in multiple community service events at schools, senior centers and a foundation for disabled children and adults; and participated in cultural tours of historical sites such as the Dragon Temple, Beomosa Temple and the Demilitarized Zone.

“It was interesting to see … worshippers practicing their traditions,” said Aviation Structural Mechanic 2nd Class Ian Garconnette, from Miami, who toured the Dragon Temple. “It was a fascinating clash of ancient and modern.”

Providing a ready force supporting security and stability in the Indo-Asia-Pacific, JCSSG is operating as part of the Great Green Fleet on a regularly scheduled 7th Fleet deployment.