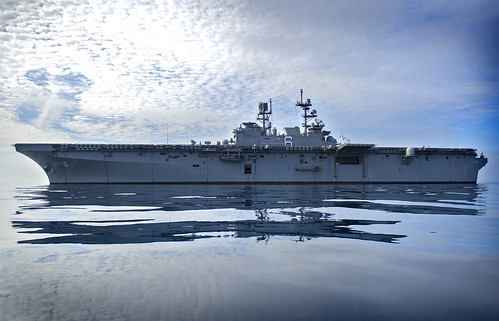 PACIFIC OCEAN - USS America (LHA 6) returned to sea March 21 after completing a 10-month post-shakedown availability maintenance period during which the crew and contractors made improvements to the ship's design.

With PSA now in the rear-view mirror, America is now conducting sea trials to test the ship's systems and sea-worthiness off the coast of Southern California.

The ship's crew faced several potential challenges when getting underway after the long maintenance period such as a successful start-up of the ship's engines, a safe sea and anchor detail, and efficient restricted maneuvering evolution. As it turned out, all major systems worked flawlessly, and the crew executed a safe and successful day one underway.

"Our biggest concern was doing everything safely and making sure no one got hurt," said Chief Boatswain's Mate Christopher Tunal, first division leading chief petty officer. "We did a very good job of getting people underway on various ships throughout the fleet, so every new Sailor on board had at least two or three underways under their belt. By doing that, we were able to bring America the experience we needed to get her underway."

Many of the crew members said they were excited to be finished with the availability and anxious to test the ship's capabilities.

"I'm excited because ships are meant to be at sea and Sailors are meant to be on ships," said Ensign Timothy Rose, conning officer during the first sea and anchor detail. "Really, getting underway allows us to fully do our jobs and show what we are made of."

For a good many of the newest crew members who checked aboard during PSA, this underway represents the first time they were doing their jobs underway.

"This is my first underway in my new rate and I'm excited to learn more about my job," said Gas Turbine System Technician (Mechanical) 3rd Class Shawn Magill. "Now that we're underway, and our equipment is up and running, I get to see new aspects of my job."

The completion of America's PSA period marks a key milestone in the ship's history. With this major work complete on schedule, America is now ready to continue her mission as an aviation-centric amphibious assault ship; a true force multiplier to the Expeditionary Strike Group, the Navy and the United States.

America's Commanding Officer, Capt. Wayne Baze, said, "I could not be prouder of this fine ship and the wonderful Sailors and Marines who continue to give her life. It is good to be at sea again where America belongs."