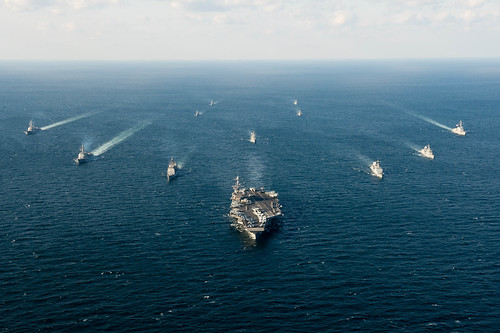 MCSOF focuses on joint and combined defense-in-depth military execution using units over sea, air and land. The goal is to increase the interoperability of U.S. and ROK forces in the Korean Theater of Operations.

Chicago native Lt. Cmdr. Jennifer Huck, Helicopter Maritime Strike Squadron’s (HSM) 71 operations officer said that the MCSOF mission was designed to help defend the Republic of Korea. “For our event specifically, we had U.S. and South Korean aircraft participating, and each aircraft had a specific role.”

Ships from Destroyer Squadron 15, based in Yokosuka, Japan, provided forces to augment JCSSG throughout the exercise, further enhancing U.S. and ROK combined tactics and sea control.

As JCSSG executed the MCSOF mission, it also focused on energy conservation and demonstrating the capabilities of the GGF. The purpose of the GGF is to highlight a culture of energy efficiency and flexibility. JCSSG has different operational requirements depending on the mission at hand and completes those missions using as much smart energy use as possible. By using energy efficient systems while conducting operations, JCSSG increases its combat capability, flexibility, deployment range and duration.

FE16 was a series of joint and combined field training exercises conducted by U.S. and ROK Combined Forces Command (CFC) and United States Forces Korea (USFK) component commands (ground, air, naval, and special operations). Approximately 10,600 U.S. service members and ROK forces from all services participated. Six of those ROK service members embarked aboard John C. Stennis to provide cross training and reinforce better understanding between the two navies. The ROK sailors were given tours of the ship and briefed on routine operations of the embarked air wing.

“The relationship between the U.S. and Korea can become better and stronger than before through this priceless experience,” said Lt. Woo, Byung Sung.

The ROK sailors were impressed with the sheer size of John C. Stennis, the amount of personnel on board and most of all, flight operations. They enjoyed their brief of flight operations with John C. Stennis Commanding Officer, Capt. Gregory Huffman, on the bridge. “I will tell my commanding officer this was a very exciting experience, and I am very appreciative,” said Lt. Lee, Hyun Ho.