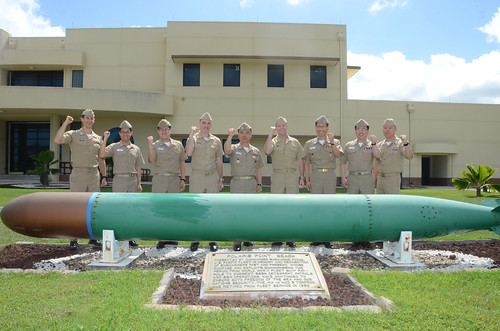 Members of the U.S. and Republic of Korea submarine forces pose outside Submarine Squadron 15 at Polaris Point, Naval Base Guam, to celebrate the conclusion of the 43rd Submarine Warfare Committee Meeting. (U.S. Navy/MC3 Allen McNair)

The 43rd Submarine Warfare Committee Meeting, hosted by Submarine Squadron 15, brought together representatives from the U.S. and ROK navies.

The underlying theme of the talks was to leverage the strong relationship between the U.S. and ROK to advance the capabilities of both submarine forces.

"This conference provides an excellent opportunity to foster the relationship between the U.S. and Korean submarine forces and is becoming increasingly more important," said Merz.

"Bilateral talks like these improve our planning and coordination in support of maintaining peace and stability in the Asia-Pacific region."

At the conclusion of the conference, a formal agreement was signed between COMSUBGRU 7 and CSF. The agreement reaffirms the longstanding relationship and pledges continued support between the two submarine forces.

"I strongly believe it is because of the enthusiastic support of the U.S. and especially the submarine force that we are who we are today as a submarine force," said Youn. "We hope to continue closely coordinated efforts with our regional partner."

Established in 1994 during the birth of the ROKN submarine fleet, the SWCM has evolved into a discussion between U.S. and ROKN submarine forces and focuses on submarine tactics, force integration and future submarine development.

The ROKN visit to Guam centered on the 43rd SWCM but also included office calls to the command leadership of Naval Base Guam, Guam Naval Hospital, Andersen Air Force Base and SUBRON 15. COMSUBGRU 7 and CSF also toured the Naval Submarine Training Center Pacific Detachment Guam and the War in the Pacific Museum.

"Hosting our partner nation during their visit to Guam has been invaluable," said Capt. Jeffrey Grimes, commander, SUBRON 15. "We were able to show them the evolving submarine force presence here in Guam and discuss the importance of having submarines available and able to quickly respond when the need arises. Having a strong and capable partner nearby allows for greater bilateral training opportunities, which we look forward to in the future."

The squadron staff is responsible for providing training, material and personnel readiness support to these commands. Also based out of Naval Base Guam are submarine tenders USS Frank Cable and USS Emory S. Land.

The submarines and tenders are maintained as part of the U.S. Navy's forward-deployed submarine force and are readily capable of meeting global operational requirements.