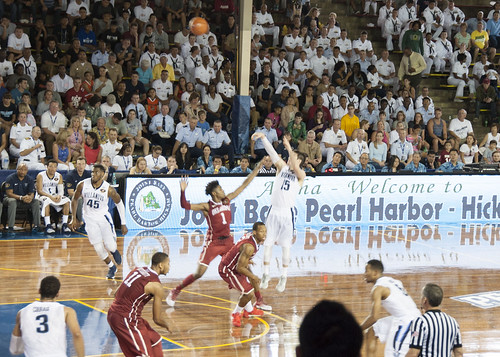 PEARL HARBOR - One of this Saturday's Final Four NCAA matchups was previewed at historic Bloch Arena earlier in the season - in honor of National Pearl Harbor Remembrance Day.

Rewind to about four months ago on December 7, when Joint Base Pearl Harbor-Hickam hummed with activity to honor the fallen and living heroes of the infamous attack.

For the first time, Fox Sports made it a point to be part of the commemoration and surrounded the already packed itinerary of events with two days of programming that included the hosts of NFL football, a baseball clinic with former and current MLB stars and two top collegiate basketball games that seemed to bring March Madness right to the very court of the base's historic Bloch Arena.

While basketball fans were certainly treated with the appearance of the U.S. Naval Academy in a PAC-12 game against the Ducks of Oregon University, the real buzz of the hoops doubleheader was a matchup of a possible preview of college's Final Four between the Oklahoma Sooners and the Villanova Wildcats.

As fans can recall, the highly touted battle between the Big 12 and Big East powers turned out to be no contest at all, as Oklahoma, behind the triple-double of Isaiah Cousins and 18 points from guard Buddy Hield dismantled Villanova in a 78-55 rout.

After suffering a defeat as bad as that, many thought that a Final Four appearance by Villanova might not happen this year, but the stars have somehow aligned to set up a rematch between Villanova and Oklahoma on the biggest stage of the Div. I basketball.

On April 2, the two teams will square off once again when the 33-5 Wildcats hope for some sweet revenge against the 29-7 Sooners.

The game will be televised live on TBS. Check local television listings for updates.

The winner of the game will face the victors of the Syracuse vs. the Tar Heels of North Carolina showdown for the NCAA Men's Division I crown in Houston, Texas on April 4 at a time to be determined following the Final Four matchups.

After being thrust into World War II on December 7, 1941, the Pacific became a hotbed for the U.S. military and their allies in a combined effort to preserve freedom.

In contrast with the perilous duty, sports provided a welcome relief, as professional and top amateur athletes from around the country joined the rank and file in the Pacific to fight for one common cause, including Ted Williams, Joe Louis, Jackie Robinson, Joe Dimaggio, Yogi Berra and Bobby Jones, among others.

Last year, as survivors, family members, dignitaries from around the world and military members from all branches joined the yearly pilgrimage to Pearl Harbor in remembrance of December 7, sports returned as part of the tradition with a special broadcast of NFL football, baseball clinics and a collegiate basketball tournament featuring the Naval Academy and three top-25 teams in the nation all presented by Fox Sports.

In a whirlwind of activities to honor military men, women and family members, events kicked off on Saturday morning with a baseball clinic and talk that was hosted by sportscaster Harold Reynolds, a two-time MLB all-star with the Seattle Mariners. It featured former New York Mets Benny Agbayani and current players Shane Victorino, Jeremy Guthrie and Mitch Harris, who pitches for the St. Louis Cardinals and is a graduate of the Naval Academy (2004-08).

"I graduated in 2008 and signed with the Cardinals and ended five years active in Norfolk," Harris recalled. "It's great because I've been on both sides. To be a naval officer and then come back here, it's great. It's always fun to give back and hopefully, if they learn a little something, a little inspiration, that's all we're hoping for."

Agbayani, who grew up in Aiea in a home overlooking Pearl Harbor, said that although he lived just outside the gates of Joint Base, the place has a way of giving you goose bumps whenever you visit its hallowed ground.

"It a great honor because these men and women are fighting for our lives," he said. "For me, I'm like, I'm going to do this. They are away from their families, so it's almost like how it was when I was playing.

In seeing the packed attendance at Ward Field, Agbayani said that he wasn't so surprised at the size of the crowd and also commented that it was good to see both young and older fans at the clinic.

"Baseball is America's pastime," Agbayani said. "Just coming here and seeing the kids smiling, you can see that they want to live that dream also. I dreamed about it as a little kid and I made it a reality. You never know, one of them might become a Major League Baseball player."

While Fox Sports may have kicked off their three-day visit with America's pastime, it followed up with two other sports that are becoming or might be just as popular.

On Sunday, the Fox football broadcasting team, with the likes of Howie Long, Terry Bradshaw and Michael Strahan took center stage by hosting their NFL Sunday coverage from the Battleship Missouri Memorial.

Then on December 7, fans from around the world were treated to back-to-back NCAA Div. I basketball games featuring the nation's No. 7 team Oklahoma versus No. 9 Villanova in a showdown of top-10 squads.

In the nightcap, Naval Academy took on No. 25 Oregon.

The televised doubleheader, which was played at Bloch Arena, had Oklahoma beating Villanova, 78-55, while Oregon defeated Navy, 67-47. 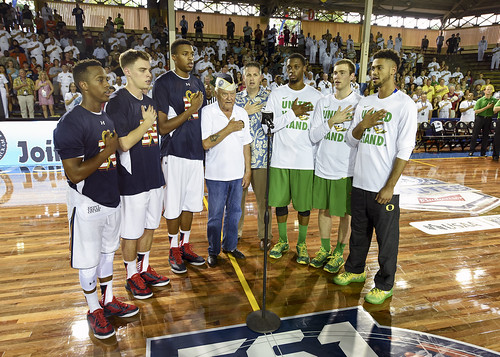