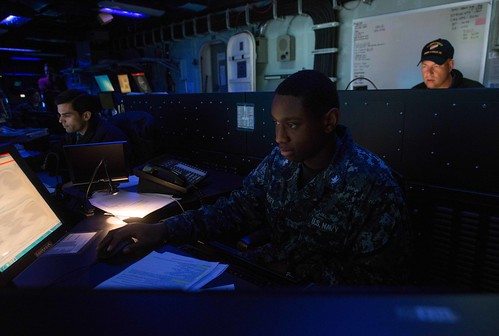 FST-J is a computer-based synthetic training which allows geographically separated units to integrate in a tactically and operationally demanding virtual environment.

“This FST-J exercise is conducted according to 7th Fleet requirements to ensure the units are current on their training and certification,” said Capt. Richard Haidvogel, the commanding officer of Tactical Training Group, Pacific (TTGP). “Ultimately the goal of these exercises is to improve interoperability with our joint partners and allies.”

“The benefit of conducting this exercise on multi-platforms is that it’s a “dress rehearsal” that prepares us for deployment,” said Lt. Cmdr. Craig McDonald, the Joint Interface Control Officer (JICO) for Commander, Task Force (CTF) 70. “We have the ability to flex our tactics, techniques and procedures with all of the other commands.”

The various units worked together during the course of more than a week operating under a synthetic simulation environment designed to mimic warfighting in a “peer threat” environment.

“The purpose of this exercise is to get our joint players, the Command Task Forces in the area along with our other allies and units, to simulate any threats that might occur in the area and stimulate our systems to ensure that they are working effectively,” said Haidvogel.

Synthetic training exercises, such as FST-J, improve the capabilities of the interoperability between the U.S. and other units. Each FST-J exercise is specifically focused on a different mission with the ultime goal of maintaining readiness to support security and stability in the Indo-Asia-Pacific.