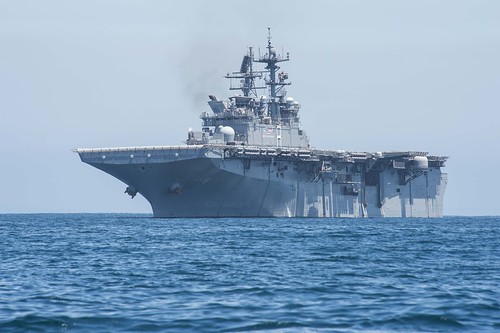 Group Sail is the first step in the Makin Island ARG's integrated training phase and aims to enhance interoperability between the three ships and the staff of Amphibious Squadron (PHIBRON) 5.

"Group Sail is a critical training opportunity for the upcoming deployment because it gives the ARG a chance to identify an effective battle rhythm, establish communication procedures, strengthen the staff's relationship with the ship crews and conduct multi-ship operations," said PHIBRON 5 Commodore Capt. Michael Crary.

"Practicing these skills as a team enhances our ability to operate as a fully integrated force during the upcoming 2016-2017 deployment," said Crary.

"Straits transit training is a critical evolution for the ARG," said Makin Island Commanding Officer Capt. Jon P. Rodgers. "Sailing as a group forces ships to think broader and act as a team outside the lifelines."

Crary said the ARG performed well during Group Sail and the success was a product of teamwork and preparation.

"Our Sailors have worked extremely hard to bring the ships and staff to this level of readiness, and it was evident in their performance this week," said Crary. "Each ship and the PHIBRON staff learned some significant and valuable lessons that each will build upon to set the ARG up for success during the rest of the integrated training phase and deployment."

With Group Sail complete, the Makin Island ARG, together with the 11th Marine Expeditionary Unit, will focus on the remaining elements of the integrated training phase, which consist of PHIBRON-MEU Integrated Training, Composite Training Unit Exercise and the Certification Exercise, as the group continues to refine its skills for a scheduled deployment in fall 2016.