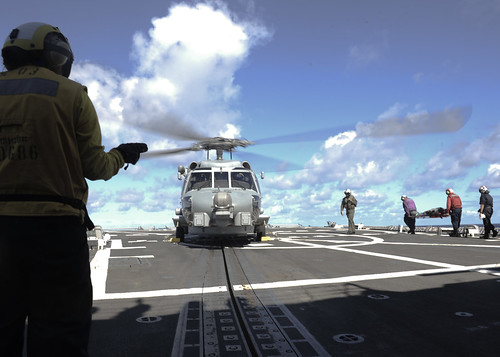 At approximately 2:14 p.m., June 17, Shoup notified Commander, U.S. 3rd Fleet that a Sailor on board required MEDEVAC. Shoup, over one thousand miles from shore, was not within helicopter range to conduct the transfer, and U.S. Coast Guard District 14 did not have an asset in the area that could affect a rapid transfer of the Sailor ashore. Michael Murphy, the 3rd Fleet duty ship, was directed to provide support.

Within hours of the initial report, Michael Murphy, sortied from Joint Base Pearl Harbor-Hickam with a Navy medical doctor from Hawaii embarked. While Michael Murphy made best speed to close within helicopter range of Shoup, the medical team aboard Shoup worked to keep the Sailor stable.

Embarked Helicopter Maritime Strike Squadron (HSM) 35 launched an MH-60R helicopter from Shoup early in the morning June 18, to transfer the Sailor to Michael Murphy. Once safely on board, Michael Murphy headed back to Hawaii and transferred the Sailor and embarked doctor to Tripler Army Medical Center (TAMC) as soon as the ship was within helicopter range.

The Sailor is being treated by medical personnel at Tripler Army Medical Center.

"While our thoughts and prayers remain with the young Sailor who is fighting through this medical emergency, we could not be more proud of the extraordinary team effort from USS Shoup, USS Michael Murphy and the medical teams ashore," said Vice Adm. Nora Tyson, commander of U.S. 3rd Fleet. "There is nothing more important to us than the health and safety of our Sailors and that was on display during every facet of this emergency response."

Michael Murphy is named for Lt. (SEAL) Michael P. Murphy, a New York native who was posthumously awarded the Medal of Honor for his heroic actions during Operation Red Wing in Afghanistan in 2005. Murphy was the first person to be awarded the medal for actions in Afghanistan and the first member of the U.S. Navy to receive the award since the Vietnam War.