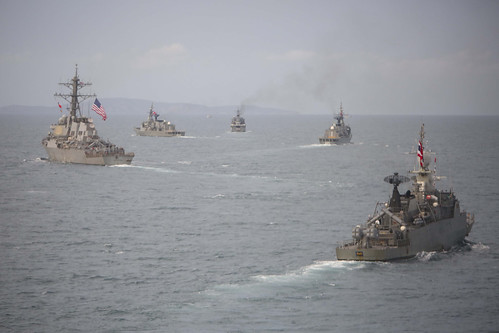 At sea, multiple warfare areas were addressed when the two navies conducted an air defense exercise, gunnery exercise, cross-deck helicopter operations, anti-submarine warfare training, and complex surface warfare maneuvering tactics. The successful execution of such a diverse and complex exercise was made possible by the relationships and familiarity the two navies have forged through 22 consecutive years of operating together during CARAT.

U.S. Marines from Company E, 2nd Battalion, 2nd Marines moved ashore via amphibious assault vehicles launched from the well deck of USS Ashland (LSD 48) during an amphibious landing with their Royal Thai Marine counterparts. The two forces moved together across the beach and conducted building searches and security sweeps while securing the beachhead. Following the assault, Marines from both nations worked side-by-side in jungle warfare training and a noncombatant evacuation operation (NEO).

During the harbor phase, Seabees from Naval Mobile Construction Battalion (NMCB) 4 and the Royal Thai Navy Construction and Development Regiment started construction on a library at the Khao Chi Chan School near Sattahip. Construction on the library used new building techniques that had not been previously used in a CARAT exercise.

"It's been a great opportunity for the Seabees to learn an innovative building technique with our partners here in Thailand," said Ensign Michelle Fitzgerald, officer-in-charge, NMCB 4. "Not only are we able to teach and learn through varying construction methods, we are able to build something alongside our counterparts that can be used by the Khao Chi Chan School for years to come."

Also participating in the harbor phase were Sailors from Mobile Diving and Salvage Unit (MDSU) 1. Together with their Royal Thai Navy counterparts they completed four days of dive training, followed by a diving exercise while aboard Safeguard-class salvage ship USNS Salvor (T-ARS 52). The training included a variety of topics including medical and equipment checks and communication methods.

"I was very excited to work with our Royal Thai Navy counterparts this year and they were very eager to learn from our team," said Lt. Mark Snyder, officer-in-charge, MDSU 1. "The Royal Thai Navy divers showed great energy throughout the exercise and we were able to tailor our training to the areas in which they were most eager to learn."

Community service events and performances by the U.S. 7th Fleet rock band "Orient Express" were held throughout the exercise and enabled Sailors and Marines to give back to the community.

After more than two decades of annual CARAT training engagements between U.S. and Thai Armed Forces, the exercise remains a model for cooperation that has evolved in complexity and enables both nations to refine maritime operations and tactics.

CARAT is a series of bilateral naval exercises between the U.S. Navy, U.S. Marine Corps, and the armed forces of Bangladesh, Brunei, Cambodia, Indonesia, Malaysia, the Philippines, Singapore, Thailand and Timor-Leste. CARAT 2016 is the most complex series to date. Its continuing relevance for more than two decades speaks to the high quality of exercise events and the enduring value of regional cooperation among allies and partners in South and Southeast Asia.