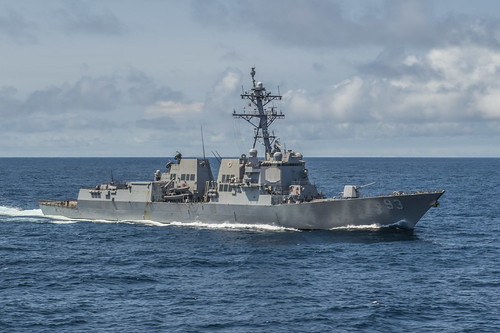 PEARL HARBOR, Hawaii - The guided-missile destroyer USS Chung-Hoon (DDG 93) is scheduled to return from a five-month deployment to the Western Pacific, June 28.

While on deployment, the ship and crew of more than 300 Sailors conducted various theater security operations and goodwill activities with partner nations.

"The Sailors and officers of Chung-Hoon performed exceptionally while deployed to the Western Pacific," said Cmdr. Tom Ogden, the ship's commanding officer. "During exercises and operations with our allies and partners in the Asia Pacific, we flew helicopters and sailed the ship in accordance with international laws and were able to show strong, persistent presence in the region."

Helicopter Maritime Strike Squadron (HSM) 37 Detachment 7, homeported at Marine Corps Base Hawaii, embarked aboard Chung-Hoon during the deployment. They flew 245 sorties, totaling more than 680 hours with two MH-60R aircraft in support of multi-national exercises and presence operations in the Indo-Asia Pacific.

"The relationship with Chung-Hoon was outstanding from day one," said Lt. Cmdr. Justin Eckhoff, HSM-37, Detachment 7 air boss. "The crew was professional and very welcoming, allowing us to form a great team."

According to Eckhoff, the camaraderie he experienced during the evolution was not only remarkable, but valuable and directly impacted mission success.

"As a detachment, we adopted the nickname 'Paniolo,' a word for the cowboys of the Hawaiian Islands. The original Paniolo were hard working, resourceful, and shared a strong tie of brotherhood. Those same traits were evident every day from the maintainers, aircrew, and pilots of HSM 37, Detachment 7. Thanks to their efforts, we operated the world's most advanced helicopters night after night, safely, and effectively."

During the deployment, Chung-Hoon made port visits to Japan, South Korea, Singapore, and the Philippines, and participated in numerous community service projects including volunteering at local elementary schools, orphanages, and soup kitchens.

In February, Chung-Hoon participated in Foal Eagle, an annual bilateral training exercise designed to enhance the readiness of United States and Republic of Korea forces and their ability to work together during a crisis.

In June, Chung-Hoon participated in Malabar, a trilateral naval exercise with Japan and India to increase inoperability. During Malabar, Chung-Hoon received fuel from the Indian oiler INS Shakti, further showcasing the ability of the nations to operate together.

Chung-Hoon also participated in a group sail across the Pacific Ocean with ships from the Japan Maritime Self-Defense Force and the navies of India, Singapore and Indonesia in preparation for exercise Rim of the Pacific (RIMPAC).

Twenty-six nations, 45 ships, five submarines, more than 200 aircraft and 25,000 personnel will participate in the RIMPAC exercise scheduled June 30 through August 4, in and around the Hawaiian Islands and Southern California.

Chung-Hoon is assigned to Carrier Strike Group 3 and Destroyer Squadron 21 and is homeported in Hawaii as part of U.S. 3rd Fleet. It is also part of the Great Green Fleet, an initiative that highlights the Navy's efforts to transform its energy use to increase operational capability.

Chung-Hoon was commissioned Sep. 18, 2004 and was named after Rear Admiral Gordon Pai'ea Chung-Hoon, who served during World War II and was the first Asian-American flag officer. He is a recipient of the Navy Cross and Silver Star for conspicuous gallantry and extraordinary heroism as Commanding Officer of USS Sigsbee from May 1944 to October 1945.