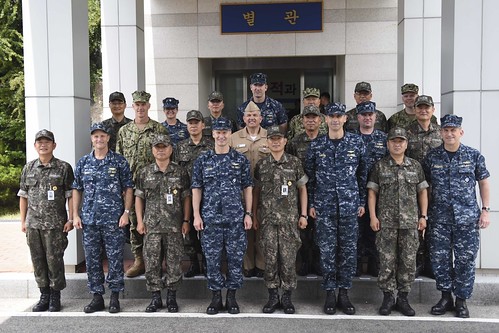 The ASW Cooperation Committee, created after the signing of the original cooperation charter in 2014, is held twice a year to improve ASW capability and interoperability between the two navies.

“It is my pleasure to host the [ASW] cooperation committee,” said Lee. “This meeting is proof that the U.S. and ROK relationship is strong, and the success of this committee shows that our bond is increasing.”

Aucoin, who recently visited the ROK ship Cheonan memorial in Pyeongtech, said the unprovoked attack in 2010 by North Korea stresses the importance of improving and practicing ASW tactics.

“It was moving and memorable,” said Aucoin of the memorial. “The attack and loss of life should serve as a somber reminder of the importance of our continued commitment to ASW. Anti-submarine warfare is not easy, but it is important, and we will continue to strengthen our combined efforts.”

He went on to note the experience of the U.S. and ROK leaders attending the committee and their dedication to developing training scenarios to enhance combined capabilities across all ASW domains from the subsurface, surface, and air.

"We have assembled the right people here," said Aucoin. “ I am grateful for the work that has gone into this effort, and I look forward to discussing how we can improve our already close ASW coordination.”

Commander, U.S. Naval Forces Korea is the regional commander for the U.S. Navy in the Republic of Korea and provides expertise on naval matters to area military commanders, including the commander of the United Nations Command, Combined Forces Command, and U.S. Forces Korea.