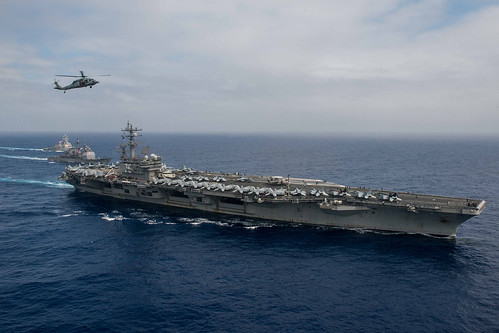 Prior to their operations in the South China Sea, the ships and aircraft within the strike group have been operating in the Philippine Sea to maintain improve their readiness and develop their cohesion as a strike group.

CSG 5 partnered with the John C. Stennis Strike Group June 18-19, to conduct dual carrier operations, maintaining the interoperability between the ships and the embarked air wings.

“Our forward-deployed ships are operating here to maintain the seas open for all to use,” said Rear Adm. John D. Alexander, commander, Task Force 70 (CTF 70). “The U.S. Navy has flown, sailed and operated throughout the Western Pacific in accordance with international law for over a century, and will continue to do so.”

CSG 5 is the U.S. Navy’s only forward-deployed strike group located in Yokosuka, Japan, and routinely operates throughout the Indo-Asia-Pacific.