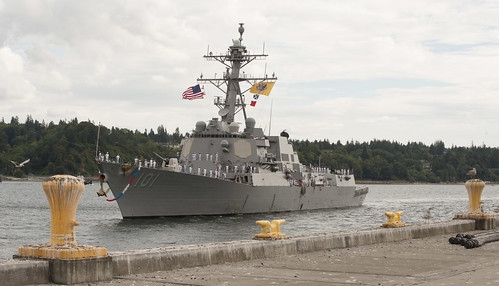 Gridley is the first of four destroyers to be reassigned over the course of the coming year as part of an ongoing homeport realignment. The ship arrived late in the afternoon after transiting from its original homeport of San Diego. The move has been anticipated since September 2015.

"We are thrilled the Gridley is coming here today," said Capt. Mark A. Lakamp, commanding officer, NSE. "We welcome the families and will work to give them all the support they need, and we're looking forward to them becoming a part of Naval Station Everett's big family."

Gridley is a welcomed addition for the base. Recently there have only been two Navy ships stationed in Everett after the decommissioning of four frigates and the departure of aircraft carrier USS Nimitz (CVN 68).

"I can tell you from my crew's perspective that we're very happy to be here now," said Cmdr. Marc D. Crawford, commanding officer, Gridley. "At some point we were just like 'okay, we just want to get to Everett now, now, now,' so it's good to finally be here."

For the base, each new ship means more personnel to care for -- a fact NSE is ready to embrace.

"Every ship that comes in has over 300 new Sailors and their families coming here, so for the base that means we have more people we can support as far as having our [Morale, Welfare and Recreation], and our Fleet and Family [Support Center] services increased," said Lakamp. "We have some customers now. With no carrier here and only two DDGs, we had a lot of people wanting to help Sailors and now we have that again."

According to Lakamp the ships will also benefit the local community.

"For the community, it means they have the economic impact of the Sailors and their families living here; with Nimitz not coming back for the next couple of years, that's a great feeling for the community to be able to support them," Lakamp said. "The Economic Alliance of Snohomish County, and the chamber of commerce have been very supportive of these ships coming."

The size of NSE offers a unique experience for ships who will need to rely on the base for various services including maintenance, housing, medical and family support.

"I prefer the smaller bases like Everett because you don't get lost in the shuffle; you have the resources when you need them," said Crawford. "So I think that's important for the crew and the ship."

A change of homeport is a significant undertaking for a ship. It can also be a challenge for some members of the crew.

"Moving the ship itself is really simple -- we get underway from one port and pull into another," said Gridley Command Master Chief Michael A. Gonzales. "The part that's really difficult is moving all the families over the last couple of months. Everyone [who is] married had to move their family up here and find a place to live, and with the ship's schedule, find a time to actually move up here to Everett."

Gonzales also said it has taken the crew some time to warm to the move as a whole.

"It started with hesitation, not knowing what Everett and Washington had to offer, but over the course of last couple weeks the crew's been [really] anxious and excited to pull in," said Gonzales.

With Gridley now calling Everett home, so will its crew. Along with living on base, some of the crew and their families will take up residence throughout the local Snohomish County area.

"I think Everett and the entire Snohomish County area where these Sailors are now going to live -- and not just in Everett, but also in Arlington, Marysville, Lake Stevens, Mukilteo, Edmonds, and Lynnwood even -- it's just a great place to live," said Lakamp. "I've been here for about a year and my family loves it up here. We call Everett the Sailor's choice because we have a huge amount of Sailors that once they get up here -- see what a great place it is to serve, to live -- they keep wanting to come back and they take orders here over and over again. I think when the ships get up here they're going to see what a great place it is to live."