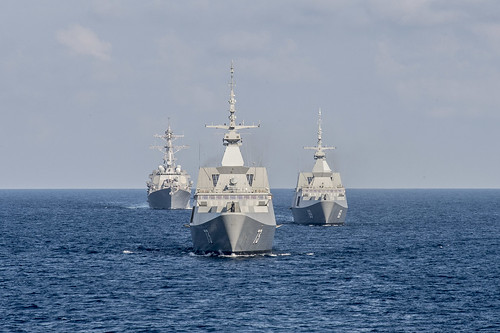 CARAT Singapore 2016 will consist of nearly two weeks of shore-based and at-sea training engagements in multiple warfare areas. The exercise is focused on addressing shared maritime security concerns, building relationships and enhancing interoperability among participating forces for the two nations.

In his opening address, the Republic of Singapore Navy Fleet Commander, Rear Adm. Lew Chuen Hong, highlighted the importance of strengthening interoperability and bilateral relations between the two navies. Speaking about the role of CARAT Singapore, Lew said, “Deep and longstanding defense relations need to be continually nurtured and strengthened. CARAT-Singapore continues to be professionally useful for both Singapore and the United States.”

At sea, the U.S. and Republic of Singapore Navy (RSN) will conduct an air defense exercise, gunnery exercise, cross-deck helicopter operations, anti-submarine warfare training, visit, board, search and seizure (VBSS) operations and complex surface warfare maneuvering tactics. The execution of such a diverse and complex exercise is testament to the relationship and familiarity the two navies have forged through 22 consecutive years of operating together during CARAT.

“The Republic of Singapore Navy is a capable and respected maritime partner that shares our commitment to the peace and security of the Indo-Asia-Pacific region,” said Rear Adm. Brian Hurley, Commander, Logistics Group Western Pacific/Task Force 73. “Twenty-two years of CARAT engagements have fostered trust and confidence among our sailors and our navies that allows us to train and operate together in a very complex manner and increase our combined readiness and capabilities.”

Also during the sea phase, and for the first time ever during a CARAT exercise, the two navies will execute a ship antisubmarine warfare readiness/effectiveness measuring (SHAREM) exercise. SHAREM measures how well surface ships and aircraft can detect and track submarines and provides the two navies the opportunity to share tactics and develop procedures for future joint operations.

During the harbor phase, professional exchanges in anti-submarine warfare, military law, aviation and medical highlight the continued trend of sharing the most advanced practices and procedures between the two armed forces.

“Our teams have been working together since the completion of CARAT Singapore 2015 to develop and plan this year’s exercise,” said Capt. H. B. Le, commodore, Destroyer Squadron 7. “We’ve incorporated new events and increased the complexity throughout, and I think this shows our mutual commitment to making CARAT 2016 the most advanced exercise to date.

After more than two decades of annual CARAT training engagements between U.S. and Republic of Singapore Armed Forces, the exercise remains a model for cooperation that has evolved in complexity and enables both nations to refine maritime operations and tactics.

CARAT is a series of bilateral naval exercises between the U.S. Navy, U.S. Marine Corps, and the armed forces of Bangladesh, Brunei, Cambodia, Indonesia, Malaysia, the Philippines, Singapore, Thailand and Timor-Leste. CARAT 2016 is the most complex series to date. Its continuing relevance for more than two decades speaks to the high quality of exercise events and the enduring value of regional cooperation among allies and partners in South and Southeast Asia.