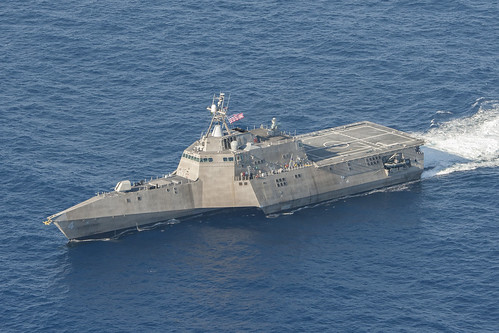 Coronado is the first Independence-variant LCS to deploy to the U.S. 7th Fleet as part of an initiative to deploy multiple LCS to the Indo-Asia-Pacific region in just a few years. The Freedom-class LCS variants USS Freedom (LCS 1) and USS Fort Worth (LCS 3) have previously deployed to the region. Coronado, like Freedom and Fort Worth, will operate from Singapore as a maintenance hub and rotationally deploy crews during the deployment.

“Similar to the Freedom and Fort Worth deployments, Coronado will participate in exercises and engagements throughout South and Southeast Asia and beyond,” said Capt. H. B. Le, commodore, Destroyer Squadron 7. “The LCS platform is well suited for this region and provides a unique opportunity for our partner and allied nations to operate alongside one of our navy’s newest and most advanced platforms.”

“We've worked very hard preparing for this deployment and now we have the opportunity to operate alongside our partner nations throughout the Indo-Asia-Pacific," said Larson. "We'll be able to share our knowledge and skills while learning the operations and tactics of other regional navies, which will make us better prepared to work together in times of crisis."

Coronado and its combined crew of about 100 Sailors assigned to LCS Squadron 1 and Helicopter Sea Combat Squadron (HSC) 23 began their deployment June 22 after departing their homeport of Naval Base San Diego. They participated in the Rim of the Pacific 2016 exercise, in which the ship conducted a Harpoon Block 1C missile LCS-based launch.

The firing of the Harpoon missile from Coronado represented the first time over-the-horizon (OTH) missile technology has been introduced to the LCS class.

Fast, agile and mission-focused, LCS are designed to operate in near-shore environments and employ modular mission packages that can be configured for surface warfare, mine countermeasures or anti-submarine warfare.