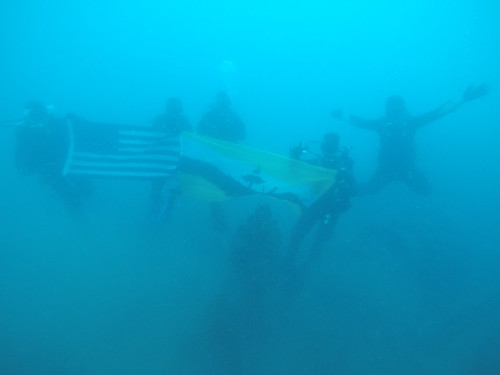 MUARA, Brunei - Navy divers from Mobile Diving and Salvage Unit (MDSU) 1 are teaming with Royal Brunei Navy personnel Nov. 16-18 for diving operations on former USS Salute (AM 294), a World War II-era minesweeper sunk by a Japanese mine during preparations for amphibious landings in the Battle of Borneo.

The diving operations are the first by the U.S. Navy on the wreckage of Salute, which lies in approximately 90 feet of water in Brunei Bay. The operations are occurring with divers embarked on Military Sealift Command rescue and salvage ship USNS Salvor (T-ARS-52) who are in Brunei for Cooperation Afloat Readiness and Training (CARAT) 2016.

The dives on Salute were preceded by a remembrance ceremony at the U.S. Embassy in Bandar Seri Begawan, Nov. 14, where U.S. Ambassador Craig Allen and Rear Adm. Don Gabrielson, commander, Task Force 73, recognized the service and sacrifice of the fallen Sailors who served aboard Salute.

"We have a unique opportunity during CARAT to pay tribute to the Sailors of USS Salute who gave their last full measure for our nation," said Gabrielson. "Our remembrance ceremony and diving operations on Salute solemnly honor an important historical site, and pay rightful respects to the legacy of brave Americans who will never be forgotten."

Salute struck a mine June 7, 1945, while conducting sweeping operations for an Australian landing force in preparation for the Battle of Borneo which liberated Brunei from Japanese imperial forces. Salute sank just after midnight June 8, after a failed attempt by two Navy landing craft to salvage the ship.

Lt. James J. Hughes, an officer aboard Salute who survived the explosion, later recalled the final hours before the minesweeper sank.

"The ship was hit mid-ship, right underneath the belly, and it came right up through all the decks," said Hughes. "Anybody in that area was killed, especially in the engine room; they didn't have a chance. We hit it about 4:00 in the afternoon and sunk about midnight. We were making the last run of the day."

For Navy divers visiting Salute's wreckage, it is an opportunity to pay tribute and reflect on a solemn war grave where U.S. service members perished.

"These operations provided U.S. Navy divers a unique opportunity to work alongside our Bruneian counterparts on a very meaningful project," said Lt. Chris Price, detachment officer-in-charge, MDSU 1. "We are preserving our Navy's rich history and heritage, and giving a very fitting remembrance to these fallen Sailors."

U.S. and Royal Brunei navy divers are conducting operations on the Salute wreckage in support of CARAT Brunei 2016. As one of the original CARAT partners, the Royal Brunei armed forces have engaged annually in CARAT since the exercise series began in 1995. The United States and Brunei have enjoyed diplomatic relations since 1845, when USS Constitution dropped anchor in Brunei Bay.

In its 22nd year, CARAT is a bilateral exercise series between the U.S. Navy, U.S. Marine Corps, and the armed forces of nine partner nations in south and southeast Asia including Bangladesh, Brunei, Cambodia, Indonesia, Malaysia, the Philippines, Singapore, Thailand, and Timor-Leste.