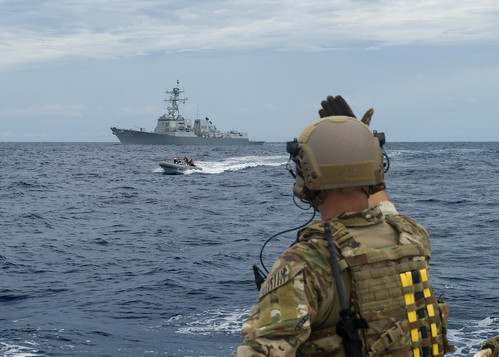 A Coast Guard law enforcement detachment from Pacific Tactical Law Enforcement Team Detachment 108 embarked USS Sampson (DDG 102) and following a visit to New Zealand and the ship's tasking to assist with earthquake relief there, conducted eight fisheries enforcement boardings Nov. 27 - Dec. 2 with the assistance of the ship's visit, board, search and seizure team and embarked air department from Helicopter Maritime Strike Squadron (HSM) 73. A ship rider from Vanuatu also lent local experience and expertise to the boardings under a bilateral agreement.

The Coast Guard works to prevent illegal, unreported or unregulated fishing throughout the Pacific Ocean. Through OMSI, the Coast Guard brings a law enforcement presence to the remote U.S. Exclusive Economic Zones, the high seas and the EEZs of nine Pacific Island nations the United States have bilateral ship rider agreements with to protect one of the most fertile fishing grounds in the world.

"Responsible fisheries management is vital to a healthy and resilient ocean,” said Cmdr. Rich Howes, Coast Guard 14th District enforcement branch chief. “The OMSI mission with the U.S. Navy not only protects this fragile marine ecosystem but it ensures future generations have access to thriving oceans with ample resources.”

During the month-and-a-half deployment, Sampson became the first U.S. warship to visit New Zealand in 33 years. At the request of the New Zealand government, Sampson’s crew assisted the nation with relief efforts to the south island of Kaikoura, after a massive 7.8-magnitude earthquake struck, Nov. 14.

"While viewing sobering images of widespread infrastructural damage in Kaikoura, I was also reminded and encouraged by the sight of my Sailors going ashore with an unwavering can-do spirit that assures me we are doing our part in supporting the New Zealand forces," said Cmdr. Tim LaBenz, commanding officer of Sampson.

Sampson then participated in OMSI taskings in the Western Pacific with embarked U.S. Coast Guard personnel.

Sampson culminated its assignment by participating in community service events in Honiara, Solomons Islands, Dec. 7 and conducting a ceremony at the island’s Guadalcanal memorial.

“This is to honor all the service members who were dedicated and [who] sacrificed so much toward a cause greater than themselves. We are forever indebted for the actions of these brave heroes – the Sailors, Marines, Soldiers, Airmen, and Coast Guardsmen we honor today,” said LaBenz. “We are privileged to walk in the shadow of this historic monument that recognizes a rich piece of nation’s history and reminds us of the selfless service to country that is so great about our nation. We are fortunate and honored to be amongst their memory.”

“These memorials recognize the many challenges and partnerships of the Navy, Coast Guard, Army, Marines and Air Force, which lead up to a pivotal moment in reversing the tide for the U.S. and our allies,” said LaBenz. “We are honored to be here and that Sampson could be here to take part in this day.”

Sampson is reporting to U.S. 3rd Fleet, headquartered in San Diego, while deployed to the Western Pacific as part of the U.S. Pacific Fleet-led initiative to extend the command and control functions of 3rd Fleet into the region.