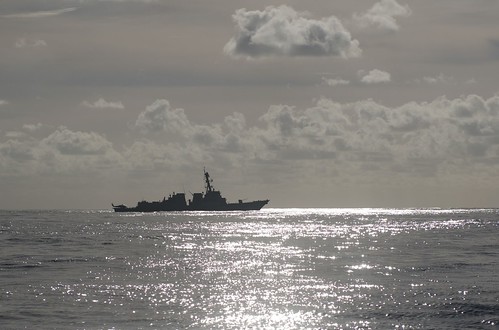 Ship visits like this create opportunities for the United States and Pacific Island nations to strengthen security cooperation and ensure a safer and more prosperous future for the region.

Michael Murphy will also conduct a memorial ceremony, Feb. 11, to honor the Sailors, Marines, and Coast Guardsmen who died during the Battle of Guadalcanal. During the ceremony, U.S. Coast Guard Chief Warrant Officer Fred Mann, who recently passed away, will be honored. Mann was a World War II Guadalcanal survivor and Silver Star recipient for his actions aboard USS George F. Elliot where he valiantly fought Japanese forces off Guadalcanal Aug. 8, 1942.

The ship and crew of more than 300 Sailors departed Joint Base Pearl Harbor-Hickam for a regularly scheduled deployment with the Carl Vinson Carrier Strike Group as part of the U.S. Fleet-led initiative to extend the command and control functions of U.S. 3rd Fleet into the Indo-Asia-Pacific region, Jan. 13.

Commissioned on October 6, 2012, USS Michael Murphy is named after former U.S. Navy SEAL Lieutenant Michael P. Murphy. Murphy was posthumously awarded the Medal of Honor for his heroic actions during Operation Red Wings in Afghanistan, June 28, 2005. He was the first person to be awarded the medal for actions in Afghanistan and was the first member of the U.S. Navy to receive the award since the Vietnam War.