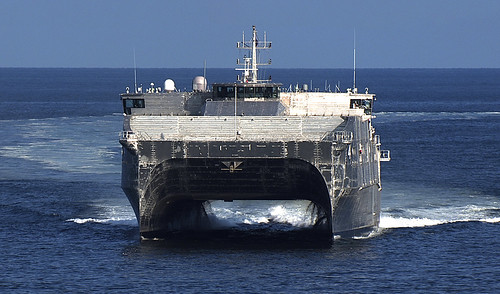 SINGAPORE - The U.S. Navy will join allied and partner nation forces for the 12th Pacific Partnership mission, scheduled to begin March 1. This annual maritime operation will help improve disaster response preparedness and capacity while enhancing partnerships with participating nations throughout the Indo-Asia-Pacific region.

Pacific Partnership is the largest annual multilateral humanitarian assistance and disaster relief preparedness mission conducted in the Indo-Asia-Pacific Region. This year's mission will be led by the Deputy Commander and staff from Coastal Riverine Group ONE, embarked on the expeditionary fast transport ship USNS Fall River (T-EPF 4), and will include more than 200 supporting military and civilian personnel from the U.S., the United Kingdom, Australia, Japan, and South Korea.

"Pacific Partnership is helping improve disaster response readiness for more than a decade in dozens of nations," said Rear Adm. Don Gabrielson, Commander, Task Force 73, the executive agent for Pacific Partnership 17. "Disasters threaten us all - they ignore borders, and they disregard national sovereignty - the Indo-Asia-Pacific region averages two large disasters each year, and Pacific Partnership has been a key enabler behind many countries being more prepared today. When the distress call comes, the life-savers know who to call and what to do next because Pacific Partnership helps prepare us to manage the unthinkable."

Pacific Partnership began in response to one of the world’s most catastrophic natural disasters, the December 2004 tsunami that devastated parts of Southeast Asia. The mission has evolved over the years from emphasis on direct care to an operation focused on enhancing partnerships through host nation subject matter expert and civil-military exchanges.

Pacific Partnership 17 will have several other distinctions:

- Pacific Partnership will conduct mission stops in Vietnam for the fourth consecutive year. The visit by USNS Fall River to Vietnam is in conjunction with the 22nd anniversary of the normalization of diplomatic relations between the United States and Vietnam. Along with events such as the Naval Engagement Activity (NEA) maritime collaboration, Pacific Partnership underscores the deepening relationship between the United States and Vietnam.

- Pacific Partnership will engage in Sri Lanka for the first time in the 12-year history of the mission. This marks the mission’s initial outreach to South Asia.

- This year’s mission will return to Malaysia, where the U.S. continues to strengthen ties and cooperation.

- Pacific Partnership will continue to capitalize on the Women Peace and Security program, an international initiative designed to not only empower women, but also demonstrate the value of their inclusion in the planning and implementation of disaster preparedness and relief efforts for their respective countries.

"We've conducted extensive planning with our host nations and our mission partners over the last six months," said Capt. Stanfield Chien, Deputy Commodore of Coastal Riverine Group ONE and Pacific Partnership mission commander. "I'm very pleased with how we've come together as a team and are ready to execute this year's Pacific Partnership mission."